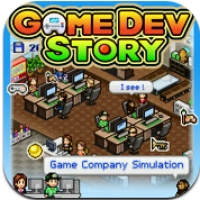 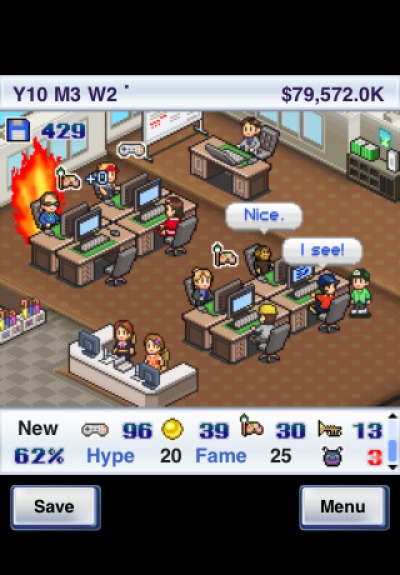 OK, I admit it. I started getting excited about going on this Odyssey long before I arced it up and entered the pint-sized world of Game Dev Story.

A game about developing games where I get to be Odysseus, leading my trusty team of IT soldiers to their ultimate goal. What could be more post-postmodernly self-referentially megalomaniacal? I could be bigger than Microsoft. Cleverer than a smart-card. I could tell better stories than even The Bard himself. Perfect.

At first, I looked endearingly at my Lego-ish dudes and dudettes as they trundled around the open-plan office space. (I may have had to squint a bit, as there's not much real estate to be had on my Android screen, but I could make out the general gist of it.)

I made some wise decisions. I shepherded my flock of cleveries, I smiled beatifically upon them as they worked in frenzied bouts (and occasionally combusted), building and writing games. We took on contracts to earn cash so we could upgrade our skills and acquire new software. We kept in touch with the latest goings-on in the game development world. But then things started to go horribly wrong.

What could be more post-postmodernly self-referentially megalomaniacal?

But my minions grew tired. I watched them pootle out of the office in the morning just as others were arriving for a day's work. They slept for 30 seconds before they were back in the office. 30 pitiful seconds!

And that's when I realised things weren't as they seemed. I wasn't Odysseus. Just like Plato's allegory, I was a poor sucker chained to a cave wall, watching only the shadows of a reality I could neither see nor access.

And as soon as I realised this, things started to fall into place. I hadn't even seen a line of code. I hadn't storyboarded anything. I hadn't even brainstormed for a single second. Those little dudes and dudettes were keeping it all from me.

I may have made the money, but I had no control. None! Surely something had to change, or I would be pressing the Home button on my phone and checking my email instead.

Whichever way I looked at it, I had a limited number of choices. Pick one of four contracts. Buy the upgrade to boost your sales. Or not. Choose one of two extremes -- but no option in between.

Where was the content? Where were the shades of grey? And how could I build a business without knowing what was going on behind the scenes?

I was a poor sucker chained to a cave wall, watching only the shadows of a reality.

I grew despondent. I powered down. There was no Triumphant Homecoming. The only thing I can say with some confidence is that The Prize always comes at a Price.

I played Game Dev Story. That was my Prize. The Price was my faith: I lost it to a consumerist world where form trumps content, and we are supposed to settle for the options we are presented with.

You can support Libby by buying Game Dev Story