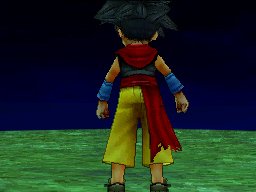 Dragon Quest Monsters 2 is one of those games that has a history. Not a thousands-of-years-history like the Odyssey, but -- according to the Wiki Seer -- it's the fourth instalment in the Dragon Quest games.

As such, to a new player (like myself), it can feel a bit like you're scratching the surface of a whole other world of characters and jargon and rules. It's like arriving in a foreign land and trying to navigate the jargon, learn about the local celebrities, and follow the road rules.

After clocking up a couple of hours on the Dragon Quest Monsters Joker 2 and feeling like I was getting nowhere, I did what many an adventurer has done over the years: I enlisted help from a real-world Side-kick: I had to ask the Google Seer what in the heck I was supposed to do next. Frankly, it was starting to feel like I was 'missing something'.

On one level, it's simple enough for the uninitiated to just range around trying to find a monster to 'scout' (add to your team) or 'conquer'.

But, on another level, every monster you encounter has a corresponding page of information associated with it, and it takes some time to get to know what all the little abbreviations and scores mean, and how they relate to each monster's behaviour, and what that means for you as the player.

I wondered what happened to the bigger Story arc.

To be honest, I'm still not sure I get it. You have the possibility to control three monsters at any one time, who accompany you as you go on your quest. You can choose how these monsters will behave in battle (e.g. show no mercy, mix it up, etc.) The outcome of 'scouting' or 'fighting' is allegedly related to the strengths of the monsters in your team versus the monster you're fighting.

Yet, whenever I tried to employ a strategy, the outcomes were all a bit random. The monsters I thought would be a push-over took offense to my efforts, and attacked my team of monsters. At other times, my capsicum-shaped monster took the team to victory without so much as sneezing. Perhaps I was reading the stats all wrong...

So I abandoned Strategy in favour of just Blitzing the Blue Slimes... but there were so many of them that I was starting to feel like I was in an asteroids game, and it was getting repetitive. At that point, I wondered what happened to the bigger Story arc, because the Gameplay wasn't doing it for me.

I suspect the Dragon Quest Monsters world is a bit like the Pokemon world is for @Master9. He has absorbed and can remember hundreds of Pokemon characters and their strengths. He knows the way their world works. I reckon this is the most baffling thing for new gamers, myself included. Who has the time to learn all this stuff? And how can you access a world that's so complete and has so much back story that you don't even know where to start?

"In medias res" just jump in and have a go.

At this point, I should point out that -- structurally -- the Odyssey tale begins in the middle of the action. "In medias res", is the technical term. If, like me, you're considering attempting one of these Dragon Quest Monsters Odysseys, the best advice I can offer is to just jump in and have a go. Dive in, in the middle of the action, as Homer did, and see how things unfold.

You can support Libby by buying Dragon Quest Monsters -- Joker 2