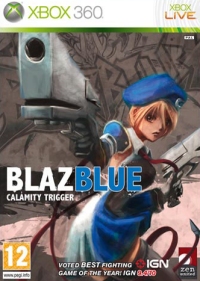 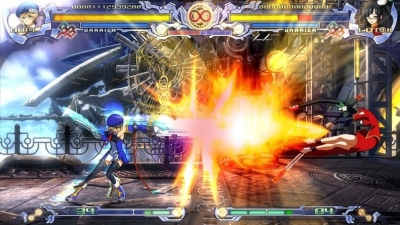 BlazBlue 360 is clean understandable fighting. Unusual for a fighting game, it hooked my psyche and made me consider it between sessions. The result is a game I better understand and enjoy. A fighter gateway drug of choice.

In the frenetic world of fighting, I would always hit my 'ceiling' - I'd reach a point where any meaningful progress would feel almost impossible. It could've been a particular mode, difficulty, boss, or more typically, an online competitive mode. Whilst a significant investment of time might have seen me break this ceiling, it would be too difficult to actually care.

BlazBlue was different though. It encouraged me to smash the ceiling. It was still seemingly as high as ever, but Calamity Trigger made educated and informed play appear realistically attainable. Fighting games are not my forte - being bad at them, however, is.

Pulling off a 'whoa, what was that!?' attack rarely proved itself to be difficult. Whether it was an empowered dash across the screen or a flip that would oft send my opponents dizzy, it was never too far from a few button presses. This, up to a point, seemed fine. Mixing and matching the talents of my preferred character, Ragna the Bloodedge, would usually lead to a swift and successful victory. It was extremely rewarding, too.

BlazBlue's intricately detailed characters and their respective abilities always felt worth utilizing. A special attack from Jin, for example, always felt significant. These weren't measly sword swipes, or insubstantial weapons. So, despite their ease of use, executing even the simplest ability felt like progress and something to be proud of. On the flip side, the most impressive attacks made me want to save replays, show others and say 'Look what I can do!'

Between games I found my brain whirring through my defeats.

BlazBlue didn't overwhelm me with an overly expansive command list, either. I never once felt as though I was chasing an almost endless list of quarter-circles and button presses. And because of the relatively small list of normal attacks on offer, the mastery of each one felt like a significant step towards to the mastery of Ragna himself. Being 'decent' always felt like a realistic possibility.

But projectiles, such as Jin's 'ice sword', consistently ruined my best laid plans. Ducking, jumping and even dashing through the attack seemed to have little effect. It was this particular encounter that forced me to up my game. Understanding the 'how' and 'when' of each attack simply wasn't enough.

Between games I found my brain whirring through my defeats. So unusual for a fighting game, it really hooked into my perpetual gaming want, and had me strategising over breakfast or on the tube.

I began to look at each of Ragna's skills within a non-offensive context - the block ability 'Barrier' had its uses, but it also had its limitations. Effectively, I had to convert what were seemingly all-out attack abilities into defensive ones. For example, one of Ragna's aerial attacks would close the gap between me and my opponent without even touching the ground. After I learned to execute this move consistently, I began to use it to close that gap, deal damage, and as an unintended benefit, totally bypass any projectiles Jin or any other opponent might have chosen to throw at me.

It's something I worked out as much between play sessions as I did while at the stick.

Something clicked. In fact, it was this discovery - undoubtedly helped by its beautifully hand-drawn cast of characters - that compelled me to want to tackle the more advance content. The game had the ability to blur the traditional lines between novice, and veteran.

I began to realize that every slither of damage taken was entirely my fault. It wasn't an unfortunate incident or the result of a dice roll - it was the result of my inability to respond to the situation at hand. From this point onwards, if I ever found myself routinely executing move sets regardless of the on-screen action, it would be swiftly followed by a painful defeat. Again this meant more exciting prospects, not only for BlazBlue, but for other fighting games as well.

Fighting is a loosely disguised game of rock, paper, scissors - it's about finding the move that could counter, negate, or avoid my opponents.

Fighting with style, substance, and confidence became a reality. It taught me that fighting is a loosely disguised game of rock, paper, scissors - it's about finding the move that could counter, negate, or avoid my opponents. In the case of BlazBlue, if I played the best hand often enough, defeating my opponent was almost guaranteed.

It's something I worked out as much between play sessions as I did while at the stick. And it had wider implications for me. I could apply my new found skills to most games in the fighting genre. Fighting was no longer synonymous with frustration. With a vast collection of virtually untapped fighting games, one thing came to mind: how many more ceilings are there to break?

You can support Dom by buying BlazBlue: Calamity Trigger