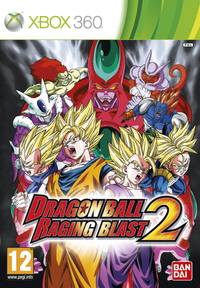 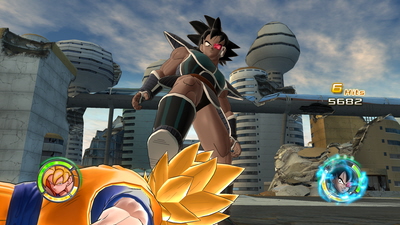 Dragon Ball Raging Blast 2 360 impresses with flashy graphics, but its simplified mechanics fail to leave a lasting impression. Fans of the manga, though, will undoubtedly love the amount of content on offer as well as the presentation.

Through its acclaimed manga series, popular anime adaptations, and lamentable movie interpretations, the Dragon Ball franchise has managed to establish itself a cult following amongst a legion of hardcore fans. Yet, the history of Dragon Ball has also been littered with some rather mediocre video game releases, such as Dragon Ball Z: Budokai and Dragon Ball Z: Infinite World.

I wanted to know whether Namco Bandai's latest iteration of this much loved franchise would provide a perpetual experience, even for those who, like me, are not big fans.

I was surprised to find a worthwhile fighting game which stayed loyal to the anime. During the tutorial, I was impressed at the vast number of techniques available to each character, and that the game took care to explain its complexities. I was beginning to believe that, perhaps, Dragon Ball Raging Blast 2 was going to provide me with a memorable fighting experience.

I was similarly pleased to find a large roster of characters while getting started in Galaxy Mode. Each challenge takes a different form, from one-on-one battles, timed battles and survival modes, to team-based battles - Dragon Ball aficionados will find a lot here to occupy themselves.

This tactic resulted in my character performing long and elaborate combos which should have left me satisfied, but instead left me feeling rather empty.

There is a large incentive to complete all of these in the form of unlockable items to please even the most ardent enthusiast. These include new fighting techniques, innumerable screenshots, several rather lengthy anime features, and over 90 colourful (and occasionally annoying) Dragon Ball characters all with their own move-sets and missions. Clearly, Namco Bandai has attempted to cater for the fans that have made Dragon Ball a hit, and they will certainly be happy with this release.

But in spite of this, I still felt disappointed. As a non-Dragon Ball fan much of this richness was simply wasted on me.

For instance, the game fails to supply Dragon Ball virgins with a narrative to drive the experience. Those who have not watched the series are required to trawl through the encyclopedia to discover why each character has their particular grudge.

But more than this, it was the lacklustre game play that finally got the better of me. The easiest way to resolve fights is by constantly spamming the attack button, with my controller consistently taking more of a beating than my opponent. This tactic resulted in my character performing long and elaborate combos which should have left me satisfied, but instead left me feeling rather empty.

There are also issues with the game's camera - it occasionally fails to track your opponent's movements, particularly during the mid-air fighting sequences. This can be a huge source of frustration, as there were occasions where your foe would punish you for one of the game's flaws. This ensured that I would often try to bring the battles onto the ground in order to give myself a fighting chance, which is regrettable, as the aerial skirmishes are one of Dragon Ball's defining features.

There are certainly parts of this release that everyone can enjoy.

It's a shame the delivery doesn't cater for a wider audience because there is plenty here to enjoy beyond the fan service - the wonderful cell-shaded character models and the innovative mid-battle transformation system to name a couple. But unfortunately Dragon Ball Raging Blast 2 is a game that prizes style over substance, leading to a bland and forgettable fighting experience.

This latest take on the Dragon Ball universe is a strictly fans-only release. The game has striking visuals, great presentation, and a treasure chest of unlockables that are buried beneath lacklustre game play. This gave me a perpetual feeling of disappointment, as a promising title that tries very hard to fully utilise its licence, is ruined by unremarkable game play.

You can support Dom by buying Dragon Ball Raging Blast 2