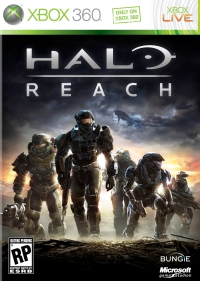 Halo Reach 360 is full of poignant moments that tell a story that will stay with me long after Bungie start their next project. Whether playing with friends or on my own this is one of the greatest shooters of this generation.

The Xbox 360's flagship title is well worthy of the magnitude of hype surrounding its release. The game play is as slick, fluid, and as tight as we have come to expect from the Halo franchise. Combat seamlessly progresses from one excellent shooting gallery to another, revealing more Covenant destruction, and an increasing air of human desperation. Simply put, the campaign is exceedingly immersive, providing the best single player experience not only in a Halo game, but in any first-person shooter across the current generation of consoles.

Greatly contributing to Reach's appeal is the fantastically varied array of weaponry. New hardware, such as the Grenade Launcher and Needle Rifle prove to be excellent additions to Noble Team's arsenal, whilst the classic Magnum makes an extremely welcome return. However, stealing the show is the Designated Marksman Rifle (DMR), with its 3x zoom making it the ideal head shot weapon.

Never has dealing death in the Halo universe been so refined. New armour abilities also provide a great twist on the classic formula, with the Jetpack rightly receiving a lot of attention, but other abilities, such as the Hologram and Armour Lock if used correctly, can prove to be a life saver.

Similarly, taking the game online is a worthwhile pursuit, and certainly ate into many hours of my free time. The player vs. player combat is so well organised. Even Firefight from ODST has made a return, and has been revamped with a much requested Matchmaking facility.

However, Halo: Reach's real success over its predecessors comes in the way in which it makes an emotional connection to the gamer. The actions and sacrifices of Noble Team are both tragic and resonate on a deeper level than other games. And it's because I know Reach is ultimately doomed.

Perhaps this is why Halo Reach has become a prevalent aspect in my life even when I am not sat controller in hand.

This desire to affect the gamer is echoed by the game's art style, as it is more like a gritty war movie than the sci-fi technicolor of previous games. This emphasises the humanity of the Spartans, connecting me to our fated heroes.

This ensures tragedy provides many dramatic engagements - the death of Jorge stayed with me long after I had finished playing. Portrayed as a somewhat benevolent and idealistic Spartan, Jorge, is only too happy to sacrifice himself to save the planet he calls home. "Reach has been good to me, time has come to return the favour", he offers just before his one-way trip aboard a Covenant cruiser. Yet the tragedy does not lie in the nature of his heroic death, but in that fact that his death is in vain, making his ultimate sacrifice an extremely poignant moment of the game.

What makes this instalment more perpetual and memorable than its predecessors are the individual stories that have shown me courage.

I would happily talk at length about the exploits of Noble 6, however his story is to be experienced, not told. The ultimate success of Halo: Reach's narrative derives from the understanding of his courageous actions, and the impact that it had on the overall conflict with the Covenant. I found the epilogue of a game to be extremely powerful in delivering the conclusion to a fantastic, epic, and grandiose adventure.

Perhaps this is why Halo Reach has become a prevalent aspect in my life even when I am not sat controller in hand - the world around me gives me frequent pause to consider how a Spartan would tackle my situation. And when I am in the vicinity of my 360, there is the huge draw of online game play and the customisation options surrounding your Spartan avatar that will ensure that Halo Reach is a permanent feature in your disc drive.

Bar the occasional moment of frustration, I was in the main just happy to be in the world they had created.

There is more to Reach than assassinating unsuspecting enemies who live on the other side of the galaxy. What makes this instalment more perpetual and memorable than its predecessors are the individual stories that have shown me courage, sacrifice, and more importantly, how to destroy a large Covenant vessel with a slip-space rupture!

Halo: Reach is filled with all the hallmarks that have made this franchise such a success. But as well as all that, we are finally given a human element, a point of reference to truly empathise with. And this makes it something special.


You can support Dom by buying Halo Reach