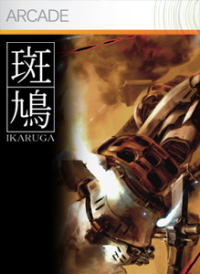 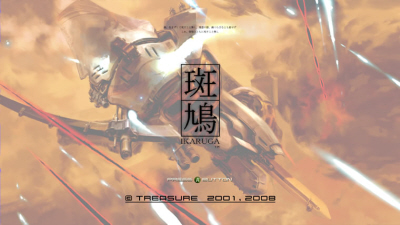 Ikaruga XBLA provides a memorably difficult experience that rewards those willing to put time into its bullet saturated levels. Although the Achievements taunted me between games, once accomplished they became some of my most fondly remembered gaming moments.

Imbued with a large feeling of nostalgia, Ikaruga has succeeded in re-igniting my perennial love for traditional 2D shoot 'em ups. Timeless game play, intelligent level design, and a marvelous sense of challenge make Ikaruga as exciting as it is frustrating. Yet, Ikaruga has managed to provide me with a perpetual notion of achievement, as the more time I spent playing it, the more rewarding my experience became.

For those who may be unaware, Ikaruga's game play is dependent upon a yin-yang polarity concept. All enemies are either black or white firing bullets of that hue and your ship also has the ability to switch states. White bullets cannot destroy you if you're white, with the same rule applying if you are black. Hence there is always a way to survive, even when the screen is filled with enemy fire.

The polarity system can also work to your advantage in an attacking sense, as opposite coloured fire does increased damage to the unrelenting hordes of foes. And in a clever twist, as well as being invulnerable to matching bullets, your ship can also absorb them to unleash in one destructive blast. This may sound complicated, but is actually very intuitive.

On top of this you can acquire combos, by destroying three enemies of the same colour in a row. What begins as a straightforward task, particularly in the first level, gets extremely tricky as the game draws to a close.

I began memorising enemy attack patterns, replaying them in my head even when I wasn't playing.

Ikaruga is a very difficult game, and its steep learning curve may prove a deterrent for more casual gamers. There are still portions of the game that even after multiple attempts I still have no idea how to emerge from unscathed.

What for me was initially a mission to survive, after a few attempts developed into a burning desire to attain a higher rank. Then, before I knew it, I began memorising enemy attack patterns, replaying them in my head even when I wasn't playing, to find the best way to survive and achieve those combos.

This is where Ikaruga excels. The game tested my awareness, reactions, and skill in a way that few have before. Stretching across five levels, there was always an incentive for me to delve back into it - whether to improve my score, to complete a level losing fewer lives or achieving those combos.

Despite Ikaruga's Dreamcast and Gamecube roots, Treasure has also ensured that the game is still visually stunning. It perfectly utilises the Xbox 360's high definition output even though there is usually so much happening on the screen that Ikaruga's hypnotic beauty simply passes you by.

Ikaruga endures for its exhilarating sense of achievement.

Ikaruga endures for its exhilarating sense of achievement. I felt it when I first completed a level without being destroyed, and again when I gained an A rank for the first time. And I'm, already anticipating the joy of an S rank.

The perpetual message of Ikaruga is that gaming can often be a struggle, but with greater challenges come far greater rewards.


You can support Dom by buying Ikaruga