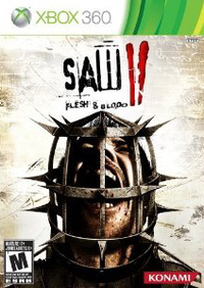 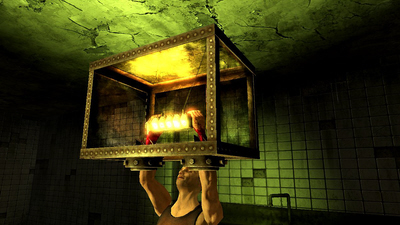 Saw II 360 doesn't learn from the first game's shortcomings, but like the films there are the moments of intelligence behind the monotony.

Based upon the popular movie franchise, Saw II: Flesh and Blood is a third-person survival-horror that sees the return of Jigsaw, along with his infamous torture related puzzles. But unfortunately, with less than a year of development time, Flesh and Blood is a sequel that lacks polish and variety. It is a bland and forgettable experience that really didn't stay with me.

As with the first game, the main flaw that undermines Saw II: Flesh and Blood is the vast amount of repetition. Every time Zombie Studios seemed to find a remotely intelligent puzzle or gameplay mechanic, they were insistent on pasting it into as many scenarios as possible, until it completely loses its charm.

What is initially enjoyable, after an hour or so becomes a chore. Repeatedly looking for numbers in the dark to open a combination lock becomes rather tiresome the umpteenth time it's employed.

Jigsaw's traps also get very predictable. By only having two types (one involving a large scythe and another involving a sawn-off shotgun), it is easy to develop a sixth sense for which door they will be located behind. This ensures that the quick-time events to evade these dangers are very easy to perform, which drains any form of suspense from the game.

Saw II is a survival-horror game without the horror.

All of this frustration is made worse by the infrequent save-points. Becoming stuck on a puzzle with no easy way to save progress guarantees that Saw II becomes unnecessarily annoying. This lack of adherence to modern convention points to developers that don't understand or care about how we now play games - I want to jump in-and-out of a game when I choose, and not at when they decide.

In an attempt to refine the poor fighting mechanics from the first Saw game, Zombie Studios have ended up making it worse. Quick-time events instantly alert you to the presence of an enemy, ensuring that I was never shocked or scared by the sudden appearance of an axe-wielding foe. Consequently, I could easily amble through Jigsaw's warehouse without feeling an ounce of tension.

Saw II is a survival-horror game without the horror. What's left is a shallow and unremarkable experience. These problems combined with monotonous environments, poor graphics, and an interface that has seemingly been lifted from a PlayStation 2 title, makes Saw II an irritating game that even Jigsaw would struggle to play.

Saw II: Flesh and Blood does have some good aspects. For those who care, there are plenty of things to collect in your journey through Jigsaw's maze, including audio tapes and case files that provide interesting background information for those interested in the Saw universe. And there are some clever puzzles in amongst the repetitive gameplay. A personal favourite of mine combined Morse code, a set of television screens, and an oversized chess board. It was just a shame that this inventiveness was in such short supply elsewhere.

The game's conclusion is also strong, if you are patient enough to get that far. Depending on a decision you made at the beginning of the game, you will either be treated to a bloody or thought-provoking convulsion. Although I cannot recommend Saw II, it was almost worth trudging through the entire game to see the final outcome.

Far from being a perpetual game, it was one that outstayed its welcome.

In spite of the few things that Saw II: Flesh and Blood does well, the game is packed with too many flaws to provide an enjoyable experience or one that will remain in my thoughts. Far from being a perpetual game, it was one that outstayed its welcome. I was more than happy to forget about it while I wasn't playing.

With repetitive gameplay, a distinct lack of tension and shoddy graphics, it is best to steer clear of this dull and forgettable game.

You can support Dom by buying Saw II