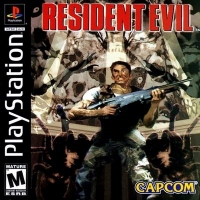 The original Resident Evil on PlayStation 1 infiltrated my life. Not so much perpetual gaming, but a game I couldn't shake from my head. It's awkward either-or mechanics, and plodding zombie foes stayed with me when I wasn't playing. But rather than disturbing me, this simply gave me time to think through the delights of each level and how I was going to tackle them next time I played.

Resident Evil is awkward in so many ways. Unwieldy controls, pre-rendered perspective, cringe-worthy dialogue and restrictive inventory design. But rather than frustrate, these limitations are what made Capcom's first venture into the horror genre all the more compelling.

I played it again recently and it remains, even years later, one of the creepiest and most perpetual games ever to have been made - it stays in your thoughts long after you've put the controller down.

An ambiguous camera makes forward planning almost impossible because, in most cases, it's impossible to determine the terrain ahead. Vicious attacks from obscure, indescribable creature were unavoidable.

Also, entry into almost every room is a game of Russian Roulette - if I wasn't able to discern the location of those unintelligible moans then I could only hope that the sudden camera shift wouldn't reveal the assailant in my surroundings.

It was the combination of restriction, scarcity and knife edge reactions that meant Resident Evil dug deep into my psyche.

You simply have to be on high alert at all times. But with this you need restraint - deciding how many bullets you are willing to waste on a single zombie, and from which weapon those bullets would be dispatched.

Not just bullets though, because save points were a resource. If my pocket was a little light on ink ribbons, or I was a considerable distance from a typewriter, a save state became a privilege, not a right.

It was the combination of restriction, scarcity and knife edge reactions that meant Resident Evil dug deep into my psyche. Later in the day, I would be going about my work and slowly drift thinking about the game. Unlike other games that I would choose to mull over while not playing them, Resident Evil seemingly demanded my attention when I least expected it.

Although the more recent games have that same charm, they don't quite capture me like the original did. Much has stayed the same, despite years of experience the cast of Resident Evil still haven't quite nailed walking and shooting. The different is that it is now clear that this is self-imposed for the sake of tension and terror rather than a limitation of the hardware.

It took me a long time to return to Resident Evil on the PlayStation 1, I wasn't sure if I wanted to share my day to day with it quite so intimately, again. But I'm glad I did, because as well as a game that gets inside your head, it really is an experience that made as much sense on it's own as it did validate the preceding franchise.


You can support Dom by buying Resident Evil