Other GamePeople columnists have reviewed this from their perspective - huh?:
Soulful Gamer (PS3)
Dressup Gamer (PS3) 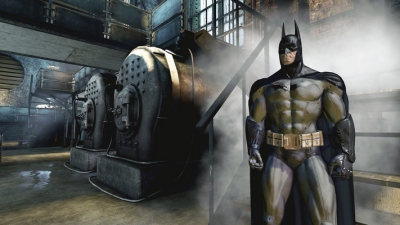 The geek in me gets to finally revel in the wonder and awe that is Batman: Arkham Asylum on Xbox 360 and PlayStation 3, I found myself thrilled to finally be able to control my comic hero in quite simply the best game I've played in a long time.

I've waited years for this day. A day when I can finally get up and proclaim that I am a Batman fan and finally a game has come out that has done the character justice! For me this is the pinnacle of perpetual gaming, a character that I can immerse myself in.

Batman: Arkham Asylum is nothing short of awesome. OK, so I'm a bit biased here. You see, the past has forced me to accept that pretty much every other Batman related game that has been released in the last 20 years was diabolically bad. The possible exception being the 1994 released Batman animated series game on the SNES which as a child I clearly remember having a slight obsession with especially when I realised not only was it based on my favourite animated series ever (with Thundercats coming a close second), but also the levels were actually based on episodes that I had seen.

The second you start to play you become immersed in Paul Dini's story line.

A trend seems to have started that more people are taking comic book characters seriously. The deaths of Batman and Captain America in their comic book incarnations made mainstream news, and serious directors like Christopher Nolan - Batman begins and The Dark Knight - and Sam Raimi - Spiderman - have created darker more realistic characters that people flock to see on the big screen.

The second you start to play you become immersed in Paul Dini's (a writer from the comics) story line and you are thrust quickly into the depths of the asylum that the Joker has taken over. It reminded me of the Batman: Rise of Sin Tsu game. But rather than being so angry at the poor development and missed opportunities I could embrace an experience that did the caped crusader justice.

You take control of Batman in a third person and begin to solve puzzles. Soon you are battling inmates and trying to solve the mystery of what Joker is up to. If that isn't good enough you get the chance to upgrade equipment, earn new gadgets, grapple between rooftops, take out enemies silently, or man up and take on a hoard all at once. As you progress you slowly piece together secrets that the 'Riddler' has left around, along with patient interviews and the general story. These are all clues into the psyche of the bosses that you'll have to face, and all this is just in the main game!

The key to Arkham Asylums success is its ability to draw me in and feel like Batman trying to second guess his foes.

Alongside that are challenge modes which are essentially mini games where you as Batman either stealth around a level and take out henchmen or beat wave after wave of baddie. It takes the excellent game mechanics and places them in both Street Fighter and Metal Gear style challenges.

Batman: Arkham Asylum mixes the best elements of Tomb Raider, the Bond games like GoldenEye and the puzzles of Broken Sword. It really is all I could have wished for as a fan, and as a gamer. And it's worth noting that a game with a plot is actually quite nice.

The key to Arkham Asylums success is its ability to draw me in and feel like Batman trying to second guess his foes. Even if it wasn't a Batman game it would be getting good reviews. So I unashamedly give it a high recommendation.

A great game, a great character, and a great feeling every time I turned on the machine. Batman: Arkham Asylum hits all the right perpetual gamer marks and leaves me happy to be a fan of games, and the Dark Knight.

You can support Dom by buying Batman: Arkham Asylum