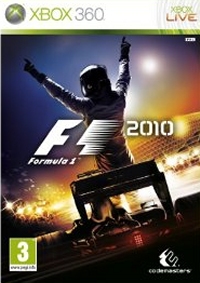 Other GamePeople columnists have reviewed this from their perspective - huh?:
Race Gamer (PS3)
Motoring Gamer (PS3) 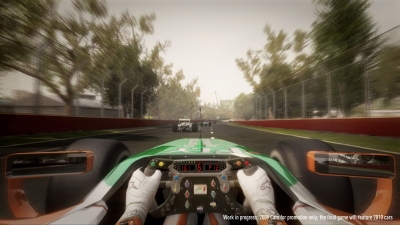 F1 2010 360 blends lightening quick simulation with a sense of theatre as it captures all that is good about Formula 1. Maybe a little on the obsessive side, but enthusiasts like me will relish the chance to delve deep into its recreation of F1.

There are a couple of racing games that still stick in my mind. Even when I'm driving a real car, moments from those experiences jump back into my head and make me smile. Geoff Crammond's first F1GP game and Indy 500, both on the Amiga, were restrained by technology but did enough to create some racing magic. It's something I've been looking for ever since.

F1 2010 is the first simulation game of more recent years that has got my adrenalin pumping as much as those early outings. This is a game about generating an unbelievable sense of speed. I challenge any mechanically minded player to try it and not chuckle.

Split Second and Blur admittedly come close, but F1 2010 is a different animal - a thoroughbred simulation. When an arcade racer piles on the speed it does it by lens effects and tricks of the light. But a simulation has to actually work the physics harder to deliver something genuinely fast.

This is a very hard game - which again ticks my diehard racer boxes. Even with the driver aids turned up the cars threaten to bolt at almost every corner. Time, attention and effort are the only way to get to grips with F1 2010. This may turn off the more casual player, but I revelled in loosing day and night to the challenge.

F1 2010 achieves all this with a much enhanced simulation engine to previous years. More detailed tyre physics join the dirty air mechanics and down force generation to offer a nuanced - and at times unpredictable - driving experience.

There are some things to help as well though. GRID's rewind feature returns here, now call Flashback. This lets you rewind the last few seconds to correct a corner or silly mistake. A little like the invaluable Mulligan option if you are playing Tiger Woods 11 with motion controls.

As I have hinted, there is a lot of F1 2010 that really has to be experienced firsthand. Weather effects are by turns race threatening and beautiful. And the general recreation of racing circuits, along with their surrounding vistas, gives proceedings a real sense of place.

It's a game that you will love wrestling with, as you battle to slowly turn off each of the driver aids. When you eventually take to the track alone - just you against the simulation - there is a palpable sense of tension and potential success.

Not everyone will connect as strongly with the enthusiast focused features as I did.

Along with all this comes a slew of new multiplayer options, but sadly no local split screen mode. Car and driver customisation are available in almost endless combinations. In fact I spent longer tweaking the look and feel of my team cars than I did driving them.

While not everyone will connect as strongly with the enthusiast focused features as I did, there is more than enough here to engage anyone with even a passing assent to Formula 1.