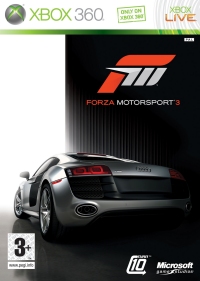 Microsoft Game Studios up the pressure in the fight to be the definitive racing game. Although having fewer years under the belt than Gran Tourismo they manage to deliver an update to the franchise that will be hard for Polyphony Digital to top.

To read around the game, hear the team talk about it and generally dig into the Forza world, there was no denying the passion and personal interest invested here. Their strap line has been "turning gamers into drivers and drivers into gamers" for some time, and they are now getting close to delivering just that.

As someone fresh from the track, or hill-climb, I'm already in the driver camp. As a reviewer I also have one foot in the gamer camp too. So hearing about a game that looks to combine these two passions certainly get's my juices going.

This is Forza 3's trump, they will admit that other racers offer similar features, but there are none that can match all of them. Forza 3 feels like a first-party sponsored title for good reason, the over deliver is clear . It's interestingly reminiscent of Bungie's Halo 3 release that they simply cram so much onto the disk - a trend that makes Microsoft published titles really stand out.

Input from the McClaren Formula One team, including conversations with Lewis Hamilton, certainly help to get the detail right here.

Input from the McClaren Formula One team, including conversations with Lewis Hamilton, certainly help to get the detail right here. From the off the experience is generally polished and hitting all the right notes.

Diving straight into the professional no holes barred, no assists mode - as is my hardcore driving want - I had the familiar racing rush as I clip apexs, accounted for track bumps, corrected over-steer and generally played with my ride. Those less ambitious can start with easier modes that provide a strong harness of assists to ensure they don't spend all their time in the sand. This mode really should let most players compete with just a little practice. Here, they are provided extra guidance on racing line and stopping distances as well as automatic gears and even a little assisted breaking thrown in for good measure.

But believe me, Forza 3 doesn't really start to sing until you turn these assists off. Turn 10 prove their worth here as you are forced to rely on your own reflexes. The simulation really kicks in and you soon realise that you can play close to (and undoubtedly over) the limit of the car's grip and momentum.

Their dirty air system that models the mess a car makes of the air as it plunges through.

New features this time around (for the petrol heads) include their dirty air system that models the mess a car makes of the air as it plunges through it, something that then affects the performance of cars behind. Then there is the tyre flex technology that models the roll over of the rubber as it gets hot during a race and increases the amount of wheel to road contact. All minor points but also important to making this feel close to the real thing.

A nice feature, seen in Grid last year, is the ability to rewind the action if you make a mistake. This enables the conscientious driver to work on their perfect line, as well as the less restrained to undo their latest zeal fuelled carnage. It also let's you re-watch those perfectly modelled pile ups and play with how the simulation responds to even very minor changes.

There is breadth here as well as depth - 400 cars across 50 manufacturers and 100 tracks. The tracks themselves are around a 60/40 mix between real world and invent environments, with the real world getting the lion share. Each non-real track shouldn't be dismissed though, as much care and attention has been applied here as elsewhere in the game. In fact each track has its own fictional history written to provide a context for the visual layout before a single cell has been drawn.

This is topped off by an impressively nuanced video creation tool that lets players direct their dream race car shots and upload them to Forza.net. There you also find other user generated content in a scoreboard system that lets players vote on their favourite videos, photos and paint jobs.

And an everyday race driver I applaud them for the wonder of that simple formula they recreate - metal, rubber and tarmac.

Forza 3 ticks all the right boxes. The attention to detail as well as the technical finesse convinces mind and body that what's happening here is significant. The problem of this simulation approach still rears it's head at times though. The simple spark of life you find in Gran Tourismo is often lacking and the game can feel a little flat. The sheer fun offered by the likes of Grid is also not quite found in full here either.

This lack of atmosphere at times is not helped by the lack of day/night cycles for long races - such a boon in Grid - as well as no dynamic weather conditions.

While it is never going to be all things to all people. What it does it does very well - deliver a detailed racing simulation. The focus is on the driving quality and accuracy. And as an everyday race driver I applaud them for the wonder of that simple formula they recreate - metal, rubber and tarmac.

You can support Jon by buying Forza 3