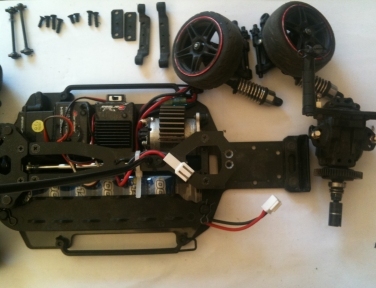 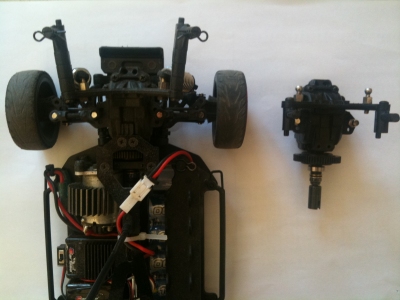 As well as getting better at driving our Carisma GT14 1/14th scale radio controlled cars, we are also learning a lot about how to fix them.

And as we put them through a pretty gruelling test each week, so it's no surprise that parts get worn or bent out of shape and need replacing. And when they do, there is usually one of us who has faced that problem before.

One particular facet of the Carisma GT14's (in the first edition at least) is that the rear differential gets looser over time. This means that after a year or so of heavy use the car makes a noticeable grinding noise and is loosing traction.

I'd lived with this on my R/C GT14 for a few weeks, but this weekend I decided to tackle a replacement. Someone else at the club had a spare differential striped from another GT14 that had been in a catastrophic crash - which is a whole other story.

As you can see from the images, it was no mean feat removing the existing differential as it is a fundamental part of the car. This takes about 45 minutes, here are my tips:

Once re-assembled you may want to adjust the GT14 differential slipper to ensure good traction.

You can support Rupert by buying Carisma GT14 Differential Change