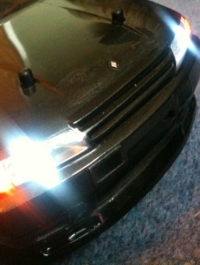 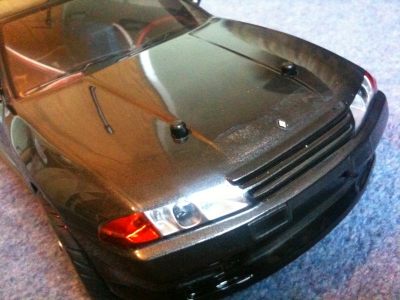 Our Carisma GT14 RC club has developed a schism. Some members are purely focused on speed and performance, whilst others are more concerned with looks and appearance. Some have even go two cars, one that they work on for looks and another for speed.

This pursuit of the best looking 1/14th Radio Controlled version of our favourite road cars has led some members to apply Custom Paint Jobs and Decals. More recently though we have been experimenting with lights.

In theory it should be possible to construct an LED light setup from a few components from Maplin. While I leave this to the more electrically minded club members I got hold of an official Carisma GT14 LED lighting system.

When I ordered them I had expected a generic set of lights that would fit any of the Carisma shells. However, when they arrived I discovered they were tailor made just for the Nissan body and really wouldn't work in any other car. Eventually I took the plunge and purchases the shell to go with the lights.

With the matching body and lights in hand I was impressed at how well designed they were for each other. The front light stickers that come on the shell by default can be pealed back to reveal the transparent housing ready for the LED system.

The lights themselves come in three parts. A front and rear set and a power unit. The power is taken from the third plug on the Receiver and fed to the LEDs via the lighting box. It's just a matter of plugging it in and switching them on to try them out. And they are impressively bright.

I had hoped that coming from the Receiver they could also transport information about turning and braking and apply the matching bulb when racing. But this was not the case, they are either on or off. 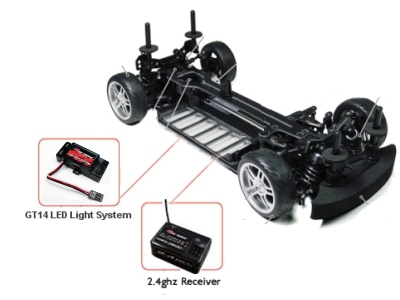 The rear lights are fixed via the spoiler screws while the front ones need to be glued in place - as far as I could tell. Both sets are molded to fit snuggly into place and create a great affect once fitted. As you can see from the pictures, the overall result is impressive and looks as if this is what the shell had been designed for.

Before racing it is advisable to ensure you have adequate bumper foam to offer maximum protection from impact as the lights are quite exposed - particular for head on collisions. I'll keep you posted on how they fair. We may introduce some new non-contact races so club members can safely break out their prized cars for a race or two.