Growing up the R/C Way

Radio Controlled Gamer in your inbox: 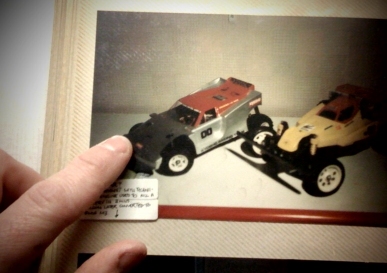 Well, my dear Grandma had in fact bought me a sonic controlled car. Which is, well, ever-so-slightly different to a radio controlled car. I summoned up a suitably grateful face, but inside, I was disappointed.

And what a thing it was - basic in the extreme, and controlled by loud audible clicks from a hand controller. It wouldn't even turn right! Left, stop, and go where your only options. To be fair to Grandma, it was reasonable fun, but it was rendered useless once I ventured away from a perfectly flat surface.

My wait continued until several years worth of pocket money accumulated and I was able to satisfy my boyhood R/C fantasies with the object of my dreams. A full-in-the-flesh Tamiya Hornet. Oh boy. And did I love that car. I loved everything about it. The big proper springy spring sock absorbers. The meaty 540 motor. The dune buggy styling. The bendy front and side rail bumpers. And before I got a chance to get too used to the car, I got the customizing bug.

It would go something like this. I'd see a friends car, like Mark from the new estate's Tamiya Fox with the 'ooooh so shiny' gold wheels. And I'd want them. So that would be the next 3 Saturdays gone, as I would trawl round Leamington Spa's toy and model emporiums in search of new wheels. But having only birthday and pocket money, I would often have to resign myself to buying a pair at a time.

Thinking back, it was so much fun tweaking a very basic car, and I can almost taste the boyish agony of saving every 50p until I could afford a new Technigold motor. Soon after that it was body-shells: polycarbonate moldings that made the car look like a touring car. I initially bought a universal Le Mans style body which i had to cut down to let the wheels turn. Then I upgraded to a BMW 3 series with wide arches. Happy times.

Oh how it absorbed my weekends. In fact, it was a combination of my Hornet (and later a Tamiya Falcon), my Raleigh Bomber and my Spectrum 48k that pretty much filled my waking moments. Until I realised I could buy a real Austin Mini in need of an MOT for Ł80.00. But that's a different story altogether.