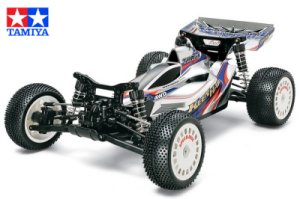 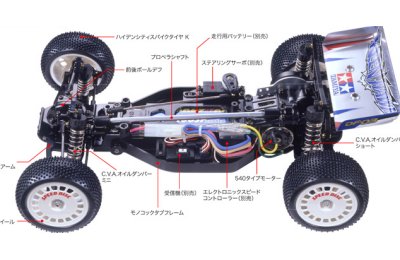 The radio controlled Tamiya Keen Hawk is a step up from the Sand Viper in both performance and complexity of build. Shrugging off the fragility of older cars, and extracting impressive perfromance from the good old 540 motor, the Keen Hawk get's a lot of things right - although it is a challenge to build for the novice R/C racer.

What type of R/C car is this?

The Keen Hawk from Tamiya is a 1/10 scale 4WD off-road buggy. Although still an entry level hobbyist car, it incorporates design features from the higher spec models. A mid-rear mounted 540 motor and longitudinally mounted battery for optimum weight distribution deliver a balanced and positive driving experience.

The high performance shaft driven 4WD chassis combine with an extra long arm suspension system to deliver improved stability and excellent off-road handling. The Tamiya Keen Hawk comes fully ball raced and with oil filled shock absorbers. Wheels are of a high density variety and foam filled for higher performance. This is all built around Tamiya's DF03 chassis and as such can take advantage of parts and hop-ups for both this and the Dark Impact.

The Tamiya 540 motor performs surprisingly well, and although some would criticise Tamiya for sticking with this older motor design it actually offers a surprising amount of torque and speed. Those that want to move the car towards racing specification can upgrade to a brush-less system. With this in mind it is important you buy an Electronic Speed Controller that is compatible with a brush-less motor will enable you to upgrade performance and reduce maintenance in the future.

Time and Difficulty to Build

The Tamiya Keen Hawk, being a 4WD, is considerably more complex to construct than similar 2WD models such as the Sand Viper. The differential gears required for both front and back wheels as well as the drive shaft between the two will tax both dexterity and attention to detail. Inserting tiny ball bearings correctly and then assembling each unit is a task requiring considerable patience.

My first outing with the car revealed that I had under-tightened the central nut and bolt in the front differential, resulting in a drastic loss in power. 30 minutes back on the kitchen table to dissassemble the front unit, tighten the bolt and reassemble soon had me back on the road again.

Also, at a couple of stages during the build you are advised to glue a couple of components into place. However there was no glue provided in the box. I completed the build without gluing and seemed to suffer no penalty - my assumption that the glue is simple suggested to ease assemply rather than for any architectural purposes.

Because of these complexities you should allow longer to build the car. A minimum of 6 hours to get you to a car you can drive, and longer for a painted model.

Although Tamiya models have had a reputation for slightly flimsy design and the need to upgrade weaker parts, the Keen Hawk shows little of that tendency. Once built it feels both solid and robust.

I would have liked a more substantial front bumper - particularly when my four year old was driving, but generally it seemed to stand up to his abuse well. Although I may be wrong, I don't think modern speed controllers can be speed limited which would be a nice feature for novice drivers and children.

Being 4WD the Keen Hawk pulls itself along more positively than the Sand Viper 2WD. The car had more a tendency to over steer than the 2WD car's under steer. This made the car easier to steer particularly through the wet stuff, and more predictable.

The kids certainly preferred the butcher drive of the Keen Hawk, but I was still quite taken with the greater challenge and under steer of the 2WD Sand Viper.

The real fun to be had though was through having a couple of these cars to race against each other. Playing R/C Tag, Time Tials and Straight Racing around some thrown down sweaters kept us entertained for a long (and thankfully dry) autumn afternoon in our local park.

The combination of bucket chassis and polycarbonate molded body again means that most mud and dirt stays out of the car. Bringing the brushed motor more central keeps it out the way of most of the much, and also away from burning misplaced fingers.

A five minute brush and wipe down is all that is needed on most occasions with a little more attention paid to the motor and internals to ensure clean-running.

The Keen Hawk is a step up from the Sand Viper in a number of areas. Performance and complexity of build enable this model to take hobbyists towards the more competitive end of the racing spectrum. More importantly, here Tamiya manage to shrug off the fragility of their older cars and offer a self-build experience that is a good balance between challenge and enjoyment.

You can support Rupert by buying Keen Hawk