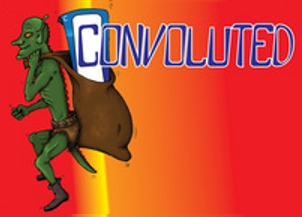 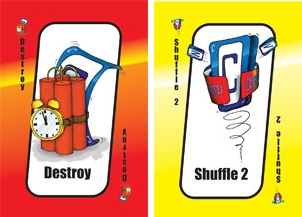 You might sometimes find you've got half an hour on your hands and just enough willpower to resist turning on the telly. Or maybe you've got friends over and you're sitting lethargically at the table after a meal and fancy a bit of light relief before the politics, religion and philosophy begin.

It's at times like this that you need a game that is quick, easy to pick up and requires only limited amount of brain power. Until recently I'd have reached for a pack of playing cards and probably had a half-hearted game of Rummy, but that might be about to change.

Convoluted is a new card game, still in the early stages of marketing and distribution, so you're unlikely to have heard of it or seen it. The aim of the game is for each player to collect cards that spell out the word "convoluted" and naturally the one who completes their word first is the winner.

Most of the cards have letters on them, but they are cleverly mixed so that some have single letters, and some have a combination of letters such as "con" or "ute" so you're never quite sure either how close anyone is to completing their word or how frustrated they are because their letters don't match up properly.

The remaining cards allow you to disrupt other people's collections or add more cards into your own hand from the deck so there is an element of strategy required. There is only so much that you are allowed to do on your turn so there is a trade off between adding to your own hand and keeping a close eye on your opponents'.

The box tells you that it can be "picked up in minutes and enjoyed for hours". The first part is true, and needs to be because if you do get hold of this game you can pretty much guarantee that, unless and until it catches on in a big way, every time you play it you'll be explaining the rules. In fact the rules are so briefly explained that we had to use a certain amount of common sense when starting off, but I think we got it about right.

The attraction is in its simplicity.

To begin with I was less convinced about the "enjoyed for hours" bit. It certainly isn't a game that I would sit down and play more than 2 or 3 times in a row, but I have revisited it on a number of occasions and can imagine keeping hold of it for those idle half hours. The attraction is in its simplicity and there is a lot to be said for that.

I do have a reservation though: I have won the game most times that I've played it. I can't say that I've played enough times to properly assess this, but it seems to me that there is a winning strategy which is fairly obvious after a little thought and which gives a distinct advantage over those who are unfamiliar with the game.

Now I have to admit that I am fairly competitive and have often wondered aloud to my wife how she can enjoy playing certain games that she never wins. Boggle would be a good example of that. And Scrabble. And Chess. I guess that makes me a bad loser, and probably mean for mentioning it, but it serves to make my point which is this. Certain games are enjoyable because of the challenge or fun in the activity itself. Boggle and Scrabble would fit nicely into this category. But Chess is just hopeless if you're mismatched. It's no fun for either player.

There is a winning strategy which is fairly obvious.

So I'm faced with a dilemma. When explaining the rules next time I play, do I just come out and say what the strategy is and create a more level playing field? Maybe not -- it doesn't seem right to take away the fun of working it out. But then no-one wants to play a game with a smart-arse who knows the best way to win. Maybe I'll just swallow my pride and spill the beans, to my wife at least, so we can see what happens if we adopt the same strategy. The only trouble is that I might lose.

You can support Chris by buying Convoluted