Sort it Out Trickster Board Games Review

Sort it Out Trickster Board Game 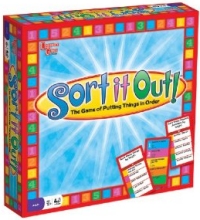 Sort It Out is a board game that tasks you with putting lists in order. Now that may sound a little dull, but the variety of imaginative (and sometimes slightly insane) questions make this a lot of fun.

There's nothing like a bit of controversy to liven up a game. There were about ten of us on this particular evening and the following question was posed -- how long does it take a grown man to urinate?

Well some of us were men, myself included, and although I have never timed myself I reckoned I could hazard a guess. And so could all the other men. And the women. What, maybe 20 seconds? 30? No more surely.

And how would that time compare with the world record time in the over 95's hundred metre sprint? I didn't even know that such a record existed. But put simply, if you began at the starter's pistol, could you complete the task before the old chap got to the end? Assuming of course he made it to the end.

And what about the shower scene in Psycho? Suppose you were in the neighbouring room (not the one with the spy-hole) and you had just started as the shower went on, could you finish in time to run to the rescue? I could just about imagine it -- getting in the shower...close up of shower-head...a bit of washing...more shower-head...more washing...knife knife knife. So what's that, about a minute and a half?

Just a couple more things. The average time of a yawn, and how long it takes for a box jellyfish sting to kill a human. First one easy, second one wishing I'd paid more attention on those monotonous Most Deadly Animals in the Universe programmes.

So there you have it. Sort that lot out into order, shortest time to longest. And then next turn it might be ordering pop stars by height. I know that Madonna and Kylie are both short but who is shorter? "Who cares?" you may very well say. But then Sort It Out is probably a game for those of us who are a little on the OCD side, and I reckon there are quite a lot of us. If you like to put everything in its right place then this is definitely for you.

The game itself is wonderfully simple.

The game itself is wonderfully simple. Each go you get a list of five things and then everyone has to order them by height, length, age, year, distance etc, and then according to how many you get right you advance or retreat on the board.

The success or failure of such a simple game turns on the questions. It could end up a bit too much like school homework -- and yes, there is no getting away from the fact that a little general knowledge wouldn't hurt. You may not have paid attention in Geography, but you'll wish you had when you are asked to order five planets by distance from the sun. Or would that have been Science? If only I'd listened.

Sort It Out has four things going for it. Firstly, it's quick - 45 minutes max. Secondly, everyone plays every go. No hanging around waiting for some know-all to finish their turn. Thirdly, there's no racing against each other. I really dislike games where you're made to rush all the time. And fourthly it really doesn't matter who wins. And that is the best bit of all. It's just a laugh.

What sort of a sick mind would want to get that sort of thing right anyway?

The questions vary from the sublime to the ridiculous and keep the conversation going. In the end the person who wins is probably the geekiest and there's no great kudos in that. But it does feel great when you get a question where you know that you know the right order.

And then you get a question where you know four out of five, and that's a bit tricky because the one you don't know could push all the rest out of order and you are left trying to explain to anyone who might care to listen that you really did know something but were unlucky. They won't believe you, and in the end you won't care.

And that's how it was with the urinating question. 2 minutes 12 seconds. Frankly I don't believe it. None of us did, except the one person (a woman) who got all five right. I'm sure it was a misprint. And what sort of a sick mind would want to get that sort of thing right anyway?

You can support Chris by buying Sort it Out Trickster