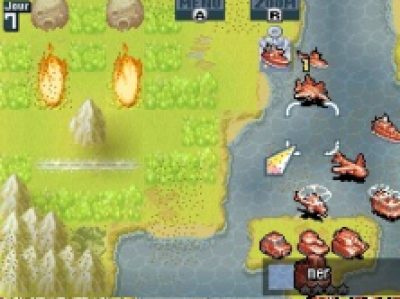 Advance Wars Dark Conflict sets its stall out with confidence. This is a serious strategy game for grown ups, with a gritty look and an engaging storyline. It's chess on steroids.

The parallels with chess are hard to avoid. Taking turns with your opponent, you have forces to deploy, a clear strategic aim, and very precise rules of engagement. It's by and large open-ended -- you can go about your mission any way you fancy. In some games you'll be able to play aggressively and launch an incisive and quick attack, others demand a more cautious war of attrition, but ultimately the choice is yours and you will stand or fall on your decisions.

But as I said, this is chess on steroids. First and most important, you'll need to be pumped, so cue rock guitar and sound effects.

Then change the board every game and add varying terrain -- roads, woods, mountains, seas, cities etc. And this is war, so we'll need every variety of armoured unit you can think of -- foot soldiers, motorbikes, cars, tanks, heavy tanks, heavier tanks, anti-tank units, anti-aircraft units, helicopters, bombers, fighters, transporters, rockets and numerous others.

But the real game changer is that you can move every piece every go. And as you progress though the story and the amount of units at your disposal grows, the sheer number of options before you becomes staggering.

All of this is really very good. In fact it is mind-blowing. I just wish I liked it.

It would be a cheap shot to draw attention to the unfolding story, which is toe-curlingly bad. But no-one really expects any better do they?

My problem is that I just can't get summon up the energy to do it justice.

Dark Conflict was sent in my direction with a confident claim that I would like because I love the occasional game of chess. It's a source of regret for me that more of my family and friends don't share my enthusiasm for the beautiful game. My wife may well have been reserve on her primary school chess team but she has let her early promise fall away, so I have a lovely chess set at home and no-one to play.

My wife may have been reserve on her primary school chess team but she let her early promise fall away.

So I've tried chess programs over the years. Some have been good, and some haven't, but invariably they reach a level of difficulty where you really need to concentrate, and you have to want to win. And the bottom line is that I find it hard to care when I haven't got a real person sitting opposite me.

It's a funny thing. Maybe it's the most natural thing. But having a living, breathing, complex yet imperfect opponent brings a game to life, even if you're sitting in silence. It's probably got something to do with hormones, but whatever the reason you cannot escape that fact that a DS game doesn't give you an opponent -- it's a piece of software. And it's a piece of software that ultimately wants you to win.

Actually that last comment is debatable. I'm new to Advance Wars and to be honest after only a handful of missions I found the game got really difficult. Here's a map, here are your 20 units, there's the enemy HQ and some of their units (the rest are hidden by fog). Your move.

If I was playing a real person I could ask them what just happened.

Where to start? Maybe I should attack that big gun with my fighter jet. But then I'll be in range of his anti-aircraft unit, so maybe not. I could definitely start capturing that city with my ground unit. Yes that's OK. Hmm...what else. My helicopters can go a long way can't they? If only I knew where to put them.

I look over all my units, how far they can move, what they could attack, how much damage they would do and what enemy pieces they would then be vulnerable to. Ten minutes have passed and I've moved one piece. I know if I finish my go the enemy will move a dozen pieces at lightning speed, into and out of fog, attacking my units with ruthless efficiency, leaving me bewildered and frankly feeling a bit of a fool.

This is supposed to be fun isn't it?

If I was playing a real person I could ask them what just happened. I might learn something. I might even be impressed by their tactical mastery. As it is I'm left with a pep talk by the humourless Captain Brenner telling me for the fiftieth time not to give up hope.

I've got better things to be doing.

Well it's all too late. I've got better things to be doing. Like teaching my boys to play a real game. I can't wait for the day that we'll sit down together with my beautifully carved wooden chess set. Evenly matched, contentedly quiet. Now that's pure family gaming.

You can support Chris by buying Advance Wars: Dark Conflict