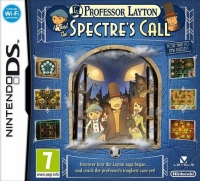 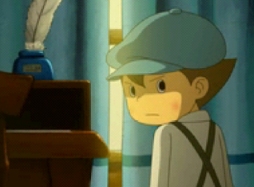 The apparently-popular Professor Layton series' fourth release has given me another gilt-edged chance chance to complain about time-wasting story games. However, either Professor Layton Spectre's Call is a lot better, or my standards are lowering, because I'm actually having a rather nice time.

My last experience of this type of game was Ghost Trick which, despite high praise from fellow reviewers, I disliked with a passion. I really don't want to read page after page of dodgy dialogue between two-dimensional characters following a paper-thin plot. But the Spectre's Call starts brilliantly and so far has done a really good job of keeping my attention.

Professor Layton Spectre's Call opens with a five minute long mini-film which sets the scene and provided me with all the context I needed. This is my first Layton game and although there is clearly a back story out there, I don't feel in any way excluded or disadvantaged, and that is a good thing. It would be easy to rely upon previous successes and make knowing references to what has gone before (or after, as this is a prequel). That may be happening, but it's not obvious, and I have felt very welcome as a new player.

But it's not long before the game begins in earnest. First of all you've got the individual brainteasers offered up by any and every character you meet. It's a strange world in which Professor Layton lives -- everyone is pre-occupied by a problem that they just can't solve, but if you can help them they'll help you in pretty much any way they can. If only life was that simple.

And if only life's problems were as simple as these brainteasers which, as far as I have got, have been entertaining but rarely difficult. I've solved around 70, and there has been just about enough variation though I'm not sure how they'll keep it going for another 100 or so.

As you solve the brainteasers you get to unlock other mini-games bearing no relation at all to the main game. You can do these if and when you feel in need of a five minute fix. These puzzles are quite different in nature and the few that I've tried have not been all that easy to solve, and provided some logic based good fun.

This is the bit that I would have expected to dislike.

And then you've got the narrative puzzle. This is your Sherlock Holmes-type plot-driven mystery. Observations are made about local legends, landmarks, geology, the behaviour of the characters you meet and so on. And you are gently led through the story.

This is the bit that I would have expected to dislike as I found myself faced with all that dialogue, and quite a bit of walking around. But again the game is kind in providing a bit of variety. Admittedly you still have to read a lot, but every now and then you get some spoken dialogue and even better more mini-films of animated action. I really like these. They have a bit of the original Hergé's Adventures of Tintin about them - slightly old fashioned looking in tone and setting - and they break up what would otherwise become dull and monotonous quicker than you could say Swaying Lamp.

But there isn't really a lot of problem solving required in relation to the main plot. The game flags up every now and then some mystery that needs explanation, and then after a while all becomes clear and you understand what was going on. In reality it's more Lost than Conan Doyle -- a succession of minor revelations gearing up for the big final scene. Somehow I just know it's going to be an anti-climax, but to my surprise I keep playing, even when I have to go backwards and forwards through the same old roads talking to the same old people.

There's just something very appealing about this game. Maybe it's all about time and place - the right game for the right mood. I may fall out of love with it before the end, but I think I'm far enough in now to keep going.

I like that it's not too demanding. It's like doing a crossword that you know you'll get most of the answers to straight away. As long as you make steady progress you don't mind having to really think for a few minutes to finish it off. In fact it's the little bit of effort that makes it worthwhile.

And yet it's never just a few minutes is it? I have my eyes wide open. The ticking stopwatch of wasted time is running. For whatever reason the game thrusts under my nose the total amount of time I've been playing every time I save my progress.

I've been playing for 10 hours and 52 minutes. Is that good?

Is this to mock me? I've been playing for 10 hours and 52 minutes. Is that good? Should I be rejoicing at what value for money I'm getting, or how much free time the dishwasher has given me? Or should I be sad that I haven't found the time to phone my mother or catch up with friends after Christmas. It's a tough call. No, really.

You can support Chris by buying Professor Layton Spectre's Call