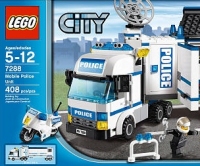 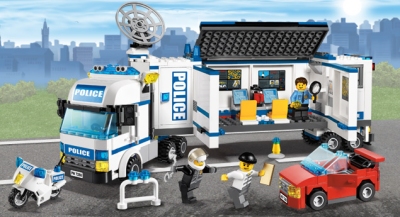 Last night at the dinner table we ended up talking about the goal Jon (aged 6) has set himself for the second half of term. He has decided that he is going to read the Roald Dahl book The Giraffe the Pelly and Me on his own, which is admirable.

But then he says that he had been thinking instead about learning "how to be good with money".

"Oh?" I reply, and then insightfully "And how would you know if you'd succeeded?"

He (without irony) "Because you'd tell me."

My mind turns to the double glazing quote, but before I have a chance to formulate a strategy, he adds "From now on I'm going to spend all my money on Lego."

Maybe they have a point. It's hard to deny that Lego is a better long term investment than double glazing, and my kids have clearly cottoned on to the fact that I need little persuasion to add to their collection every now and then. Their current enthusiasm is a result of the Mobile Police Unit [7288] which was given to them as a half-term rainy day treat and which has gone down a storm.

I don't know what it is about Lego and the emergency services. The Lego City range is not short of policemen and firemen and they already have an impressive range of buildings and vehicles to deal with virtually anything that the Lego community can throw at them. So does the mobile unit add anything? Absolutely.

I wonder if any new fire fighting sets will come with an arsonist with match in hand.

It is a building on wheels! Genius.

My boys still love anything they can zoom around the room and so although the Lego buildings are fun and increasingly detailed, they return time and again to the cars and trucks.

But that is not to say that the latest vehicles are lacking, quite the opposite. Jon recently spent money he'd saved from Christmas on the Big Truck [3221] aka King of the Road which comes complete with driver's sleeping compartment, TV and coffee cup.

He was given the job of assembling the trailer of the police unit and literally shrieked with excitement at the computer screens and coffee-maker! I was a bit disappointed that there wasn't a donut in sight, but then I know it's not supposed to be entirely realistic.

While Jon worked away on his own. James made the cab with help from a friend and Danny and I got busy with the police motorbike and the baddy's getaway car.

The introduction of the Baddy is an interesting development (I wonder if any new fire fighting sets will come with an arsonist with match in hand). In this case it certainly makes for a fun toy. He's stolen a gold bar, clearly thinking about the longer term - what with uncertain currency and stock markets.

James just enjoys 'zooming' though and gets a little frustrated when the cab and trailer separate.

Fortunately the police have a satellite dish and large magnifying glass on their unit and give chase down a blind alley with the motorbike, confuse him with their barrier and traffic cone, and finally lock him handcuffed in the attached cell. Justice will surely prevail.

All of us (of course, me included) enjoyed making the component parts, and I was very pleased that there are three separate vehicles and three minifigs so they could each play with one initially. They took it in turns to use the different vehicles and the appeal has endured.

Jon has taken the whole thing apart and reassembled it successfully all on his own. He definitely enjoys the creative process, though at the moment hasn't tried to make anything else out of the pieces. James just enjoys 'zooming' though and gets a little frustrated when the cab and trailer separate as they inevitably do (it is Lego after all).

I haven't seen the baddy with his car and gold bar for a few days so I suspect that Danny has him hidden away somewhere safe where he can talk to him. Maybe he'll try to turn him back to the straight and narrow, or maybe he'll refer him to Jon for guidance on what to do with all that gold.

You can support Chris by buying Mobile Police Unit 7288