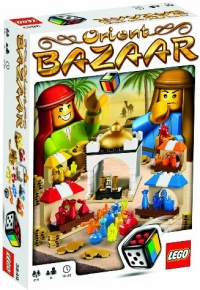 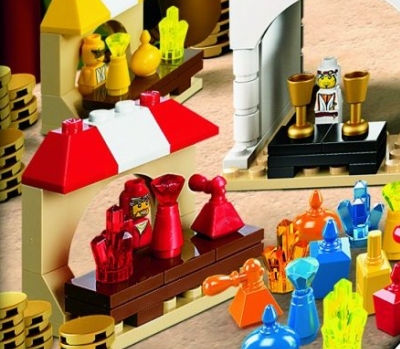 Orient Bazaar is a Lego game about the simple pleasures of buying and selling precious artefacts. Provided you are willing to adjudicate now and again it's an engaging family game.

You visit market stalls with the aim of buying a collection of similar items which when packaged together can be sold at a premium giving you a quick cash profit. You buy and sell for gold coins and if you manage to amass 15 of them you can afford the luxury of retirement (and win the game).

As with all Lego games it has to be assembled before you can play. In this case there are five individual sections, the four market stalls being identical except for the colours. This worked really well for my family as my three boys and I were able to tackle one stall each, and even Danny (aged 3) was able to join in by copying what the rest of us were doing.

The unforeseen consequence of this is that he now considers that the red stall is his, and has developed a strong attachment to it. He is too young to play really, but he can easily join in without disrupting the game for anyone else as long as the game is supervised (a prerequisite at the moment anyway, given the age of my children.)

The game is largely based on chance but has just enough strategy to allow your children to get really cross with each other. The luck element derives from rolling the famous Lego dice that determines which, if any, of the stalls you can visit on your turn.

Strategy plays a part on the turns when you get to either swap an artefact with another player, or close down a market stall for a period of time. If your children are anything like mine this is very dangerous ground - frankly I didn't dare close down a stall that any of them were collecting from. I can see there's going to have to be a bit of parental input on how to be a gracious winner and a good loser, but I guess these are valuable lessons.

If your children are anything like mine this is very dangerous ground.

In fact you could learn quite a lot from this game. You could learn that the intrinsic value in an object ultimately boils down to its monetary worth. Who cares whether it's beautiful -- how much can you sell it for?

Also you quickly grasp that money is good, and the more of it you have the better. What better goal could there be than the accumulation of wealth and the delights of stacking your gold in neat piles to be counted and re-counted?

Along the way you will also pursue your own interests at the expense of others and deliberately sabotage the efforts of those closest to you. If you get a chance to close down the opposition then surely it would be wrong not to take it - after all you've got a family to feed.

It would have been a nice addition to have a section at the end where you get to learn how to falsify your tax return so you could conceal the hefty capital gains you'll have made in the course of your business (ed: now you're talking!).

Truth be told, my kids think it's great.

I think there's a chance that I'm taking this a bit too seriously. Truth be told, my kids think it's great. It's mercifully quick and easy to set up and each turn takes only about half a minute, so there's no hanging around. They've played several times both with and without me and show no signs of losing interest. It's funny how easily they forget the misery they felt when they last played and lost. And judging by their reactions it really did hurt.

The exception is Danny. He remains completely oblivious to the pain of losing. All he wants to do is go on buying precious things from the red stall. And if he can close down a stall, then he'll close down the red one too. It's because he loves it.

You can support Chris by buying Orient Bazaar