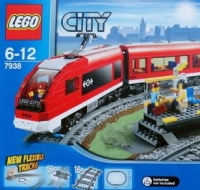 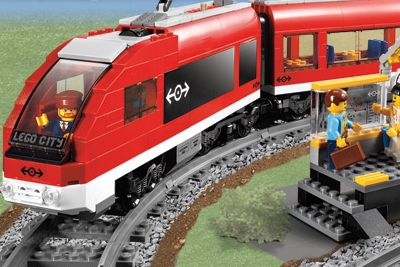 Lego's not what it used to be. A few years ago I would have ranted about compromising the simplicity and ingenuity of the old style kits with increasing gimmicks, specialised pieces and movie tie-ins. But then I hadn't actually bought a Lego kit for well over 20 years, so what did I know?

Not a lot as it turns out.

When the oldest of my three boys turned 4, I decided to push the boat out for old times' sake and buy a fair sized tub of bricks themed around the making of small vehicles and as soon as it was opened I discovered two things. Firstly, I still love Lego! And secondly the modern pieces are just as well made and brilliantly designed as ever. In fact in almost all respects they are a great improvement, and over the last year or two I have had great fun 'helping' my boys with any new kits that come their way.

The new Passenger Train (7938) and Station (7937) sets are a case in point. In the wide spectrum of Lego fandom I am definitely old school. I have managed to re-acquire lots of Lego from the 70s (having rashly given all mine away as a teenager) and have been reliving my boyhood spending hours trawling through piles of bricks looking for exactly the right piece - being a bit of a stickler for making the models the way they were meant to be. I have taken my fair share of ribbing from my wife and friends, but I take comfort from knowing that most of my (male) friends are secretly burning with jealousy if only they were able to admit it.

So I have a reasonable collection of the old System train sets (blue rails and white sleepers -- realistic colours never seemed that important) and with a bit of effort and some help from one or two fantastic web sites, I've constructed numerous engines, coaches, wagons, and a couple of the earliest stations. My boys and I have spent hours playing with it all, so I was really interested to see how the new sets would compare.

We have had the latest Passenger Train (7938) and Station (7937) for nearly a week. My oldest son is now six, and his first love is trains, though his love of Lego is not far behind -- good lad! He nearly burst with excitement when seeing the kits and we set to work at once assembling the station (I had forgotten to buy the 9 AAA batteries that I needed for the train).

Lego was always a fairly solitary pleasure for me, giving me much needed respite from my four older sisters. I've never really given much thought to the different levels of play, but engaging with my children in the whole process has been fascinating.

For me as an adult, and even I think when I was a child, making the model you have bought by carefully following the instructions was always the best bit. It is very hard to explain (and even harder to justify) the sense of pride I still feel when I have finished making a Lego model that was designed to be achievable by a six year old, but it's there, and though she might not admit it, I'm sure my wife felt it too when she finished off the bridge connecting the two platforms.

But where the modern Lego really comes into its own, easily surpassing the sets from my childhood is in the thought that has gone into how the sets will be used in creative play.

Small though it may be, it is the mini-figure that was the catalyst for this change. These are not exactly new, first appearing I reckon on the early 80s, but all the old models I had came without any sort of figures and, although this never really detracted from the enjoyment of making them or playing with them, there is something so much more enjoyable in incorporating mini-figures into so many of the models.

The new trains and station both come with standard size mini-figures and, unlike the models from my youth, the figures actually fit in the trains so you now get a driver and passengers each with their own personality and fashion accessories, and they can go in and out of the station - through the sliding door! - buy a cold drink from the kiosk -- stand on the bridge to watch passing trains (no, don't jump!) and, when they have finished, they can pop into the waiting taxi (admittedly, only after having removed the roof and climbed in) and whiz off with their suitcase safely stashed away in the boot. And for safety, the station is well lit with street lights, and is clean and tidy because of the prominently positioned litter bin. A model society indeed.

For some reason he prefers his mini-figures to be bald.

My youngest boy, coming up to three years old, is far more interested in this sort of creative play than his brothers and, although for some reason he prefers his mini-figures to be bald(!) he does enjoy having them ride on his vehicle, albeit often on the roof where he can see them better. They also talk to each other in squeaky voices.

When we got the batteries we set to work on the train itself. The old sets had motors which were either battery operated or mains operated (with an absolutely enormous but cool transformer) but, despite my best efforts, I always found attempting to run the trains frustrating. First of all, the track, while it is brilliantly simple, was prone to move about leading to constant derailment. Derailment of one type or another may well be the basis of a story line for half of all Thomas the Tank Engine stories but, when it comes to actually playing with a toy train, it is immensely frustrating. Secondly the motors themselves are getting a bit unreliable and harder to replace.

The new models (and I dare say most of the Lego trains in recent years which I've not seen) have no such problems. The track is very stable, and much to everyone's relief it is quickly assembled so the main focus is on actually playing with the train. The train itself looks good and the electrics are pretty easy to understand. We haven't had a go at making our own trains yet, but I reckon there is plenty of scope to adapt or try to work the motor and small battery box into older style models -- something for a rainy day when my children are glued to the telly.

Lego may well not be what it used to be, but contrary to what I thought, it's better.

My four year old loves anything remote controlled and the fact that the new trains are just that has increased his interest enormously. You can control up to 8 trains at once though sadly we'll probably never have that many. To be frank my children are still at the stage of being wildly excited about just being able to control the one train forwards and backwards at 7 different speeds while sitting down, standing up, lying on the bunk bed or hiding behind the chest of drawers. I am going to have to keep an eye on the remote control because I have nasty feeling that if that stops working it will not be possible to get the train to work at all. We are already having to allocate sessions monitored by the kitchen timer to avoid violence. We have been through three sets of batteries already, so rechargeables are on the way.

So I guess I'll have to eat my words. Lego may well not be what it used to be, but contrary to what I thought, it's better. It remains hugely satisfying - it's fun to make, it's versatile and now it's increasingly fun to play with. Just looking at the way my children play shows that it will appeal to a wide range of children, and not insignificantly to their parents (however old-school they might think they are). As for me, I'm just happy that I've finally got a Lego train that works.

You can support Chris by buying Passenger Train 7938