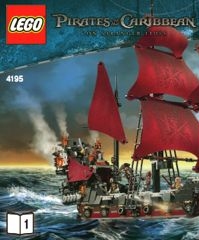 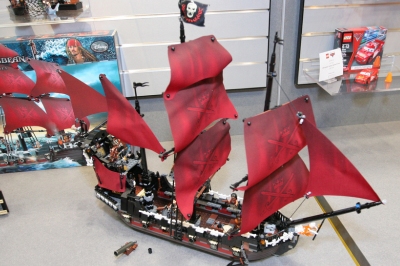 Queen Anne's Revenge 4195 is a mightily impressive centrepiece in Lego's latest construction series. If you like Lego, Jack Sparrow and playing with toy ships this could well be the moment you've been waiting for.

Lego's cupboard is bursting with its own-brand construction series - City, Creator, Technic, Atlantis and Ninjago to name just a few and over 20 board games. But seemingly not content to stick to their own creations you can also buy Lego Toy Story, Star Wars, Ben 10, Cars and Harry Potter tie-ins, and of course there's the whole videogame thing which I've been studiously trying to avoid.

In my grumpier moments you might find me sadly shaking my head and asking where it's all going to end, and for now I think I have found the answer. Pirates of the Caribbean.

First things first - I'm not a fan of the movies. As luck would have it Dead Man's Chest was on the telly recently so I watched it (for research purposes) and, apart from being a bit cheesed off by the ending, it confirmed what I had suspected and what the British Board of Film Classification had adjudicated, namely that it is completely unsuitable for my children. Maybe I'm a little old-school, but it seems to me that my kids will have plenty of time in their teens to fill their heads with the gothic and the gory and I have no intention of starting them young.

But they are all avid Lego constructors. They are three, five and seven, and seven-year-old Jon in particular is pretty adept at following the instructions. So I watched with interest how he set about constructing the Queen Anne's Revenge, given that the box suggests an age range of 9-16 years old. As it turned out he managed entirely unaided, and even helped five-year-old James complete a few stages along the way. It took just over a day to build (we were staying with relations and had other things to do as well) and it kept him completely absorbed and became a topic of much conversation over the few days we were away.

In a word, it's brilliant.

But more of that later. Much more importantly what's the set like? In a word, it's brilliant. For a start the boat is big, standing at 58cm tall and 37cm long. The colour-scheme is rich, with deep burgundy sails and a few strategically placed bricks of the same colour. There are skeletons and skulls galore, cannon that fire, and seven beautifully detailed minifigures. I was impressed, and I have seen a lot of Lego.

Purists grumble about the use of stickers, but the few that are needed, in particular on the windows definitely add something, It seems a little unlikely, but looking into the upper deck where the captain's cabin is located, the lanterns, furniture, artefacts and ornate windows bring a genuine sense of atmosphere. But then I can still remember as a young boy being able to immerse myself in my Lego creations to the point of almost inhabiting them. I guess that's what imaginative play is all about, though I wasn't really expecting the Pirates of the Caribbean to roll back the years so evocatively.

Did I mention it was big? Well having such a large new toy was potentially going to be a bit of a challenge when it came to sharing between three small boys, but mercifully a bit of careful refereeing prevented any major meltdowns. As ever it was striking how they engaged differently with it. Jon was immensely proud of it in general, having been the one who oversaw the shipbuilding process. He pushed it around the room for quite a long time, though was not really very interested in imaginative play.

Jon is good with Lego but he's not a prodigy.

James immediately seized upon the fighting equipment - there are swords galore, a few guns and those cannon. He managed to lose a cannonball within seconds, literally, of getting his hands on them, his face a mixture of delight, bewilderment and only the merest hint of guilt as the surprisingly powerful cannon fired the cannonball across the room to who knows where (we never did find it). Danny, as ever took the minifigures away and played with them. They spent quite a long time on top of the TV though I'm not sure why. I think he was holding them captive, almost certainly aliens were involved, though from what I've seen, Captain Jack has escaped from predicaments a lot worse than that.

So back to those conversations. The suggested age-range of 9-16 definitely doesn't relate to the skills required to build the model. Jon is good with Lego but he's not a prodigy. The ship is a little fragile but not overly so. The general consensus was that skulls etc (there really are a lot of them) are pretty friendly, certainly nothing to scare the more impressionable. Surprisingly my teenage nieces quite liked it, though not enough to spend their hard-earned money on. They confirmed that they knew only a few people who were still into Lego, but on the other hand they were all into Pirates of the Caribbean, having seen all the films. They were definitely not into playing with toy ships.

So why the 9+ age range? The only answer I can come up with is because young children are not supposed to be into Pirates of the Caribbean. At the risk of making wildly inaccurate and wide-sweeping generalisations, I imagine that Lego is a toy for kids, mostly boys, up to the age of around 12. A look at the other movie tie-ins, Toy Story, Cars, Star Wars, Ben 10 and to an extent Harry Potter tend to back this up. So why have Lego produced a new series of construction sets based on a movie franchise where all the films are 12 certificates?

Encouraging an interest in films that their children aren't supposed to be watching.

I don't suppose it matters, though it might put a few people off buying it thinking that it's too old for their children. Or maybe they might be concerned about encouraging an interest in films that their children aren't supposed to be watching. If so that would be a shame, because it really is a very beautiful kit.

And as to where it will all end, of course it's not with Pirates of the Caribbean. Maybe in years to come we'll be able to buy a Hannibal Lecter cell, complete with minifigure guards with removable faces. I for one would not want to see that.

You can support Chris by buying Queen Anne's Revenge 4195