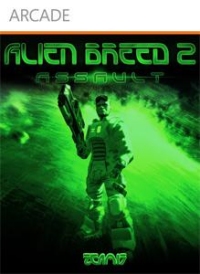 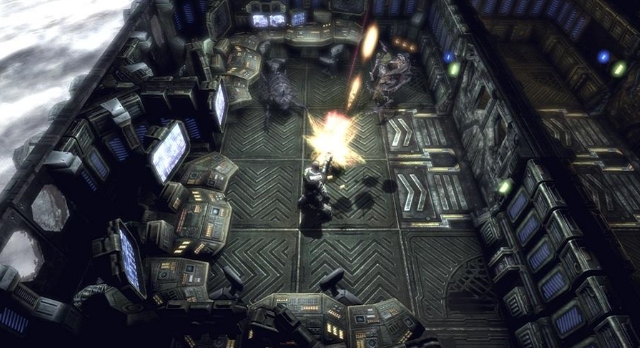 Alien Breed 2 Assault reignited my 80's memories of Aliens and games. While it had those classic Alien Breed adrenaline moments, it felt a little dated throughout.

Alien Breed 2: Assault is the second part of Team 17's relaunched series of isometric shooters available on Xbox Live and Steam. It's a briefly enjoyable experience that took me back to the excited success of the original, but the atmosphere had largely turned to cliche.

It's been the same since 1979 when Ridley Scott set the Nostromo drifting across cinema screens in Alien. Spaceships were no longer gleaming and futuristic, from this point on they would be dank, functional, gloomy factory floors complete with flashing lights, hissing gases and ominous creaking.

It's no wonder that Alien Breed, one of gaming's first homages to the Alien film series, should choose to be set aboard a Ghost Ship that is falling apart and overrun by horrid hungry alien beasts. It created the atmosphere faithfully and successfully.

Retaining the top-down, isometric view from the original, Alien Breed 2: Assault again creates the same look of industrial decay. It's all complemented by the sound, the groaning ship, distant alien howls and squelching steps through rooms coated in xeno-slime.

You play Conrad, a balding, grizzled space engineer who's unenviable task is to restart the Ghost Ship's engines while managing to not get eaten. This more interesting aspect of characterisation isn't played upon really. In theory you're not a colonial marine or super-soldier sent in to wipe out the bug menace, you should have other priorities like getting the ship working again.

However, as this is a shooting game, you will spend most of your time killing aliens with the array of weapons on offer. I felt a little disappointed. In my return to games I now want something a little more genuine in these experiences. We could have easily have spent more time puzzle solving and less time killing, given his special skills, but the career choice seems to have been a bit of an after-thought.

I'm fascinated by the way games choose to use money as the methods of gaining it and spending it are utterly removed from real life.

Conrad doesn't only collect weapons, he also finds credits as he goes. I'm fascinated by the way games choose to use money as the methods of gaining it and spending it are utterly removed from real life. You need credits in Alien Breed 2 to buy weaponry and health, every time I had the opportunity to do this I spent all the credits I had. I felt no need to keep the money, nothing in the game was going to reward me for having credits. My only two concerns were survival and alien murder. All I felt while accquiring new items was slight bemusement.

The bemusement continued during periods of aimless wandering. Maybe because I've been weened on games that would march forward in clear linearity, or maybe because of poor signposting I would lose my way. The mission instructions weren't clear for me and the map didn't help all that much. Similarly the auto-save points didn't come along as regularly as I wanted.

Luckily, an easy way to expel frustration is shooting bad guys, and lots of them. These were the points where I began to really enjoy Alien Breed 2. Fear, anger, extreme joy - I felt all of these as I pumped round after round of lead into the herds. The AI of the bugs is good, they surround you, meaning you have to master control of the analogue stick to spin around as you deal out death.

I was no longer worrying where the next pay cheque was coming from, survival here was more important than paying the rent. One particularly stand-out moment sees you defending a moving monorail car from a giant alien determined to get you with its massive claws. I actually found myself audibly sighing with relief once the assault had ceased.

It felt like I had been in need of the cathartic relief.

I was genuinely surprised at how I felt after those big set-piece sequences. It felt like I had been in need of the cathartic relief. It's impressive how these sequences are woven into what appeared to be a small, budget title. And they got the pacing just right. While few and far between, when they arrived the blood and adrenalin was pumping through me with fierce urgency. But all too quickly it was over.

Alien Breed 2 was a one-night stand of a game. It offered about six hours of play and contained some brief moments of guilty pleasure, but it was over before you knew it and left you feeling a little empty and unsatisified.

I enjoyed revisiting an old friend from before my time away from gaming.

There's nothing wrong with getting a quick hit of gaming, I find ten minutes of Wii Sports Golf relaxes me no end, but here if you wanted a quick shooting session you'd probably take ten minutes to find it and then it would be over in seconds.

I enjoyed revisiting an old friend from before my time away from gaming, but was left wanting more of the newer, more original experiences I've been enjoying since I returned to the world of video games.


You can support Sinan by buying Alien Breed 2: Assault