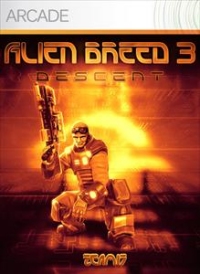 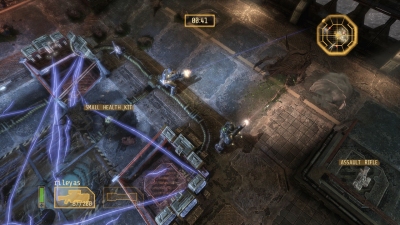 Alien Breed 3 Descent rounds out a tour de force of 90s top down shooting. Rhis, Evolution and Assault all tick the right boxes, but now I'm ready for something new.

The third part of Team 17's Xbox Live reimagining of their classic shooter Alien Breed sees the story coming to an explosive conclusion. Though repetitive and lacking in gameplay development, it does contain some unique moments.

Alien Breed 2 Assault (360) was a faithful reproduction of the original isometric game that provided plenty of bug-splattering thrills. The look and feel respectfully paid tribute to the 90s game and its movie reference material.

Alien Breed 3 is a very similar experience that felt like the concluding episode of a much bigger game. Your character, Conrad, now has to face Klein the twisted bio-engineer who has created all the alien nasties you've met. Your mission is to battle through the infested, derelict ship, repairing it where necessary, in order to meet Klein for the final face-off.

There are marked gameplay differences to Assault that helped Alien Breed 3 come to life. The first of these moments is the side-on camera view of Conrad as you have to traverse the outside of the Leopold with a limited amount of oxygen and aliens trying to rip you to pieces.

I felt genuinely excited during these parts. Although essentially the same gameplay as the previous game, the fresh perspective made it feel new. It was only after I had finished the sequence that I realise all that had changed was the camera angle.

The bosses can roam free, meaning your ability to run and gun needs to be well honed to proceed.

The boss encounters are improved as well. Too often in Assault, the boss was restricted to a corner of the playing area. But here the bosses can roam free, meaning your ability to run and gun needs to be well honed to proceed. Even so, I would still have liked some more imagination, the Alien Queen for example was neither as dangerous or intimidating as she could have been.

As in the second Alien Breed XBLA game, I was able to complete the game in single player mode in a couple of evenings, which again lead me to try the two player co-op mode. It was here I came unstuck. My partner had no interest in playing. Unlike Rock Band or Wii-Sports there was nothing here for her and "if I'd already completed the game once, why did I want to play it again?"

It made me wonder who exactly the multiplayer was aimed at? I imagine that this XBLA version of Alien Breed will be played by guys in their 30s, like me, who remember their Amiga version fondly. The chances of them living with like-minded guys are slim.

It felt like I had been in need of the cathartic relief.

I enjoyed it all but I think this is the last time I'll willingly revisit the Amiga classic on XBLA. After three episodes I'm ready for something new. If you're simply looking to relive the thrills of the Amiga days, you probably only really need to play one of the XBLA outings - Evolution, Assault or Descent. Out of the three Descent is the most polished experience with more unique moments.


You can support Sinan by buying Alien Breed 3 Descent