Beyond Good and Evil HD XBLA 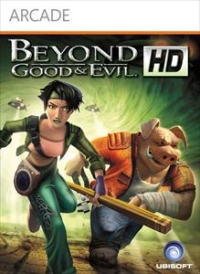 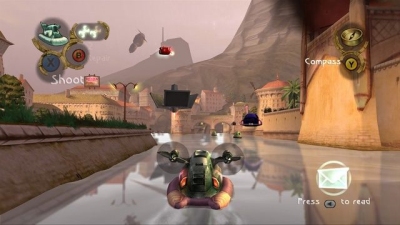 When Beyond Good and Evil was first released, I was too busy drinking vodka and watching Cheers in Norwegian to notice. Ah, university.

Eight years and plenty of hangovers later, I'm playing the recently released HD remix if only to shut up friends who can't believe I haven't played it yet. The action adventure, in which photojournalist Jade becomes the focal point of an uprising against a corrupt planetary government, is as revered as they come. Yet for all that I'm not so sure the game stands the test of time.

For one, the camera is like transdimensional jelly. It flits between angles so unpredictably that running around a room becomes a wobbly dance of perspectives. I don't remember cameras being as nauseatingly labile as this.

Unfortunately, the camera is crucial because the game involves a lot of stealth. Most missions require Jade to sneak past enemies, often to avoid instant death the moment she's detected. When things go belly-up the last thing you need, dashing for cover, is a manic depressive camera.

Taking on enemies with Jade's combat pole doesn't improve things. Watching her leap and swipe gymnastically across the screen is lovely, but pressing A again and again and again is monotonous.

But for all the ways time has hurt the game, I can see why people still love it. Eight years may cruelly magnify its flaws, but like a weary old spaniel that still loves to play there's something distinctively charming about Beyond Good and Evil. Its spirit eclipses the hindrances of age.

Most distinctive and charming of all is Jade. Journalist by day and orphanage curator by night, Jade is a selfless young everywoman. She lives with the orphans and her uncle Pey'J, a gruff but friendly engineer who is obviously very proud of his niece.

It's the moment when she becomes human.

As she should be; Jade is an excellent photographer, a capable fighter and a considerate woman. You might even say she's special; the people around her certainly would. Yet for all her talents, Jade doesn't realize what others see in her.

You wouldn't think it to look at her. The emerald green headband, matching khakis and midriff-bearing jacket, and lipstick -- also green but she works it - suggest a confident woman. She's relaxed, almost jovial on missions, but also focused. When she hides in cover, her eyes narrow and her green lips contort into a determined scowl.

As the game progresses, however, chinks start to appear. During one mission in a factory, she leaves her uncle behind to explore a hidden passage, even as he calls after her. When she returns, she sees him getting beaten up and kidnapped. After another mission she returns home to find it destroyed and all the orphans taken away. It's all too much for her.

She breaks down, blaming herself for putting her family in danger. But far from her downfall, it's the moment when she becomes human. The game paints Jade like Wonder Woman, but she is no superhero. When she takes down her first big monster, she throws her arms around her uncle in affectionate celebration. It's like seeing a little girl thrilled at doing well in front of her father. She may be cool on the outside, but Jade has self-doubt.

To me, she's someone coming to terms with the burdens of adulthood. She tries to be superhuman but realizes she cannot be perfect. Although children get away with thinking they can be perfect, as they grow up compromises need to be made. Jade too is learning how to be an adult.

Maybe I'm projecting, but I have good reason.

Maybe I'm projecting, but I have good precedent here. Beyond Good and Evil's world is inexplicably inhabited by anthropomorphic characters. On her travels Jade meets a bull bartender, rhino mechanics, and a cat spy -- and did I mention uncle Pey'J is a pig?

Cleverly though, they soon stop being different sapient animals and become people, people from different cultures. The rhinos are easy-going Rastafarians, the sharks are cool and to themselves, and the cat -- is just a cat. It reminds me of growing up in South London, a place full of different people, different looks, and seemingly otherworldly ways of life. Going from Tooting to New Malden you travel from India to Korea. The same spice of variety in Beyond Good and Evil, sure it's pigeonholing, but it works and helps you identify with the world it creates.

Gaming easily produces imaginative worlds, but often struggles to correlate them with reality. By this measure Beyond Good and Evil is more than a little bit special. It has something to say about growing up as a modern person that I can relate to -- not just the expression of multiculturalism but the priorities that pull the rug from our imagined perfectionism.

Somehow it comes together to mean something that is actually quite important to me.

It says a lot about gaming's female protagonists too. Jade, interesting and likeable as she is, is not the most complicated character on the block, yet she's still a far better leading lady than most of the current crop. Eight years on, you'd think there'd be improvement.

Beyond the flawed delivery and wayward camera Beyond Good and Evil HD is rich and interesting. Saying that is quite something on its own, but add in a woman with green lipstick, a pig uncle and a faraway planet and you have the least likely of experiences to make sense of my maturing years. But somehow it comes together to mean something that I found both interesting and enjyable.

You can support Sinan by buying Beyond Good and Evil HD