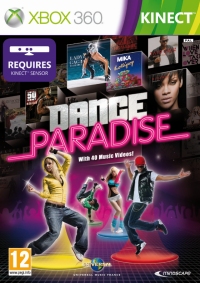 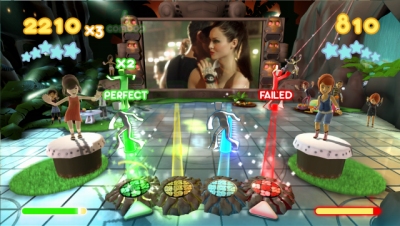 Dance Paradise misses the mark with vague controls that undermine any real sense of dancing. Even next to the old Dance Dance Revolution games, this was a disappointment.

Kinect is the kind of new technology that makes me excited to be a gamer again, but Dance Paradise represents the worst way to show it off.

Even though I'm keen to come back to gaming for fresh experiences, certain games feel like they are trying a little too hard to be different. I'm skeptical of Kinect because flashy new technology and ideas like motion control and fitness games have scorched curious fingers before.

I wasn't even going to buy Kinect. My mischievous girlfriend, knowing this full well, bought it for my birthday. Two years ago she did the same thing with Fallout 3 just a week after I'd decided that I didn't have the time to play it. Half of love is screwing with your partner's mind it seems.

So I've been jumping, jabbing, and jiving my way through Kinect games, and wouldn't you know, it's won me over. I was worried about the technology's lag and lack of precision, but most of the games I've played so far have punched big holes through those concerns.

Regrettably, Dance Paradise is not one of these games - not even close. It's charmless, tacky and tedious. Even the few hours I struggled to put into it felt like a waste of time.

To the casual onlooker, Dance Paradise might seem frivolously cute.

To the casual onlooker, Dance Paradise might seem frivolously cute with its shiny stick figure dancers. It might seem cool with its onscreen music videos from the likes of Lady Gaga and Mika. It might even seem innovative in how it uses the Kinect camera to see how well your moves match up with the on-screen guide dancers.

But the major problem for Dance Paradise is that I've played Dance Central. There's a reason that Microsoft has been plugging Dance Central as the top Kinect launch title. In fact for me it's one of my favourite games of the year.

Made by the team behind Rock Band, Dance Central oozes sophistication and innovation. It takes the Friday night DDR itch and turns it into proper dancing. Using Kinect, it picks up how all of my body moves whether or not I'm moving in time (usually not). It's precise too, down to minute angles of joints. Better than all of that, though, the game gives me specific feedback on where I'm going wrong by highlighting the relevant parts of my body. Along with visual and vocal instructions, this feedback makes learning complicated dance moves simple.

Dance Paradise is just another game looking to exploit a new market.

Dance Paradise pales by comparison. There's the mild novelty of trying to replicate a bunch of disjointed recognizable dance moves, but I lost interest so fast I didn't even lose breath. There was no skill, no learning curve, and more importantly no precision to capturing how well I was replicating the moves. It was nothing more than a bunch of disconnected Simon Says dance moves.

Although I'm proud to be a gamer I'd feel ashamed to show Dance Paradise to my friends. I don't have a problem with casual gaming but Dance Paradise is just another game looking to exploit a new market, and while it may use the new technology of Kinect, it manages to feel plain, familiar, and uninspired.

You can support Sinan by buying Dance Paradise