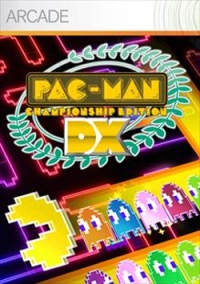 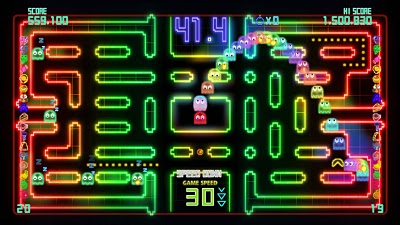 Pac-Man Championship Edition DX is a fireball of retro fun which reprises a childhood hunt: the quest for the high score.

My Mario Kart skills were never truly appreciated. I left all the other kids spluttering in my dust as I sidestepped banana skins and slung green shells like a pro, but it was in the seclusion of the time trial where I really shined. I lapped Mario Circuit 1 in a mere 12.04! But my friends were more interested in stupid sports and lame girls than my amazing high scores - losers.

With the arrival of the Internet and rise in global leader boards, now I truly have the whole world to boast to. Unfortunately though, it turns out that people out there are pretty handy at video games too. It also turns out that these days I don't have the time to play Mario Kart (Wii) endlessly, what with bills, the girlfriend, and something I never needed as a child - sleep.

Thankfully, Pac-Man Championship Edition DX is perfectly suited to the furiously competitive but time deficient gamer. Firstly, it doesn't take a moment to learn because at its core it's still Pac-Man, and even newborn babies know how to play Pac-Man. Besides, I had already gotten back on the retro saddle when I played Championship Edition two years ago on Xbox Live.

The previous version, Championship Edition (CE) was a triumph. It took gaming's first icon and rejuvenated him into something modern and challenging. CE's five minute countdown timer transformed what had always been a game of stamina and routine into an intuitively intense mix of skill and strategy.

The mass injection of pace, the slow but powerful crescendo of the background trance music, and the hypnotic disco glow of the maze helped to make the experience fresh again, full of energy and personality. I absolutely loved it.

CE revived my childhood hunt for the high score but also gave it meaning because now I was competing with my friends and indeed the whole world, and that meaning would make playing it a very nervous affair. My palms would drown in sweat as the timer trickled away. My fingers would tremble as I heard the bass build into a thunderous climax. But no matter how much CE drained and deflated me at its end, there was always one more game.

The same exact thing is happening now with the follow up - Pac-Man Championship Edition Deluxe (DX). If CE was a rejuvenation of Pac-Man then DX is a rebirth. If offers a hundred different games to play across nine maps, many more than in CE. Then there's the customisation. You can choose from a number of maze skins and background songs, and even select which visual style of Pac-Man and ghosts you want - including the ill-fated 3D skin.

However, where DX really shines is its addition of static, sleeping ghosts. First there's the delicate and deliberate placement of sedentary pellet-holding ghosts which not only give you points but also boosts your speed. Secondly, there's the chaos that ensues when you don't have pellet power. Any sleeping ghosts you pass will suddenly wake up and immediately start chasing you, and this soon leads to a comical conga line of ghosts hunting you mercilessly through the maze. All that it's missing is the Benny Hill music.

No matter how much it drained me, there was always one more game.

I absolutely love DX, it is right up there with my favourite games of this year. Not only is it a comprehensive, beautiful video game, but it connects to something inside me that makes me smile. It elegantly retains the core identity of Pac-Man while updating it for the modern gamer. It lets me regress into the little kid who wasn't happier than when he was playing the game.

There's something pure about Pac-Man Championship Edition DX which many photo-realistic games miss. Don't get me wrong, I love the visual glory of Uncharted 2 (PS3) and the technical glory of Kinect, but the sheer simplicity of Pac-Man DX is just as exciting.

You can support Sinan by buying Pac-Man: Championship Edition DX