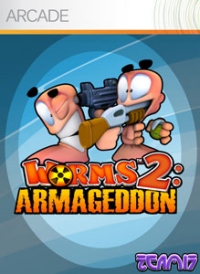 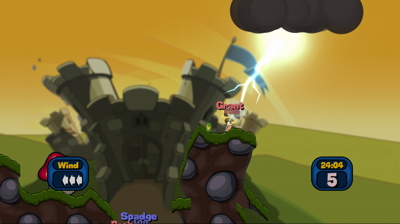 Worms 2 Armageddon XBLA combines time limited decisions with careful planning to create a game on a knife edge. The tension is then wonderfully relieved by the insane stars of the show - the soft squishy pink megadriles.

Worms 2: Armageddon, considered by many to be the best of Team 17's turn-based blaster series, has arrived on Xbox Live Arcade as a budget download. It's a fun, colourful affair that brings simple, addictive joy to your Game Library.

Upon downloading Worms 2 I found myself suddenly feeling very nostalgic indeed. In my mind's game catalogue Worms sat somewhere between James Pond, Lemmings and Cannon Fodder as examples of bright cartoon games that were designed to make the most of the Amiga's graphical capabilities.

Now, feeling nostalgia is often pleasurable, but can sometimes overwhelm your sense of enjoyment about playing the game itself, for example, when I downloaded The Secret of Monkey Island to my iPhone last year I spent a long time switching between the updated and original graphics simply for the effect of being transported back to a time far away in my past, rather than concentrating on the game's challenges.

Worms 2 however, quickly overcomes any feelings of Proustian displacement. I was soon lost in the classic Worms buzz that comes from puzzle solving and wiping out the enemy. It's hard not to feel attached to your team of worms. My team, Hell's Rejects, composed of Compo, Clegg, Foggy and Derek, were to become my best friends across the 35 missions that constitute the Campaign mode. Willingly they laid down their lives for me, blowing themselves up, as well as the enemy. It occurred to me this was one of gaming's few acceptable representations of suicide bombing.

However, during the Campaign mode I hit the wall a couple of times - frustrating hours of working out the best strategy to take down my opponents, when every missile they delivered was frighteningly accurate and my forces were destroyed with ease.

That frustration didn't turn to anger though. I found myself constantly going back and trying new tactics, because the game responds to that type of creativity. It rewarded my inventive and positive thinking and I felt validated by that.

I think it was the voices she liked best, the Worms chatter in cute, high-pitched tones.

Where Worms is most rewarding however is in the Theatre of Cruelty multiplayer mode. I recalled long hours of sitting up with friends playing the original and am pleased to say that Worms 2 can still give you the same satisfying glow of nuking a loved one's army.

Unlike Wii-Sports or SingStar, Worms may be too complex and silly to involve your Mum in - although my partner took to the game with worrying ease. I think it was the voices she liked best, the Worms chatter in cute, high-pitched tones that are rather funny. So much so that she enjoyed mimicking them when I managed to blow myself up: "Stupid!" was the cry from both the Worms and my girlfriend.

In multiplayer you stand a better chance of survival and I think this added to my enjoyment. We spent hours locked in a war of attrition, with neither of us weakening or indeed tiring of the fun we were having. The next thing we knew it was midnight and Worms had eaten away our evening.

Worms 2 is addictive because it manages to combine both the instant gratification of killing your enemy, with a sense of achievement for thinking through the subsequent defensive problems your attack may create. Limiting each move to thirty seconds made positioned my Worm correctly or getting the trajectory on a shot even more tense.

I think it was the voices she liked best, the Worms chatter in cute, high-pitched tones.

Worms 2 is never going to stretch the 360's technology or make you feel like you've participated in an incredible interactive movie. It will, however, demand that you return to it time and again.

It's a cheap, cheerful and fun experience that rewards the time and effort you put into it. As a returning gamer, it was a moment that made me feel why I'd come back to playing games in the first place, while satisfying that need for a little nostalgia.


You can support Sinan by buying Worms 2: Armageddon