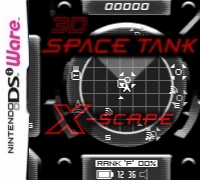 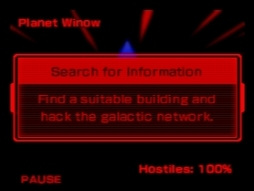 3D Space Tank provides the nostalgic buzz that retro games often fail to deliver, while at the same time creating a genuinely large-scale adventure on a small console.

For gamers "of a certain age" playing 3D Space Tank is an immediately familiar experience, albeit one that has taken a retro premise and overhauled it with the resources that modern gaming technology brings to the table.

Strongly reminiscence in visual and audio style of the early 8-bit forays into 3D games, 3D Space Tank almost perfectly captured the spirit and appeal of an older era of gaming when wire frame landscapes were the norm and enemies were simple geometric forms.

Returning to retro games is often a disappointing experience; the evidence of the hands-on material never living up to my own nostalgia. It seems that in my memory I must have "filled in" all the gaps that classic games used to have but now with more than 20 years of playing games and watching them develop, my expectations have changed. In the same way that some films from the 1920's and 1930's fail to resonate with a modern audience who no longer share the cultural experience of the film-maker;

3D Space Tank successfully avoids these pitfalls and delivers a fresh modern gaming experience with a strong retro aesthetic. Where games once delivered a palette of 3-4 colours owing to the restrictions of the technology, Tank revels in defining worlds with a limited spectrum of (in some cases) only 2 colours.

For gamers "of a certain age" playing 3D Space Tank is immediately familiar.

Tank's most obvious contemporary comparator is Tron, which is also enjoying a new lease of life. In fact there are some vehicles in Tank which are more than a little similar to Tron's bikes and tanks. It shares that love of the simplicity and beauty of a neon colour palette and geometric construction, delivered with console technology which can provide a fast-paced and slick experience.

The main body of the game plays like a dream. The Tank itself is quick and responsive and I found it easy to get to grips with the different weapons offered and the strategies required for different enemy types. My only gripe with this game is that where it is controlled through the touch screen there are some awkward control moments, especially when trying to master the two different types of strafing-moving.

While the tunnel racing sections provide a fabulous pacy thrill, I found that the balance of avoiding obstacles while also shooting at time bonuses was a little frustrating: the projectiles which the ship fires block most of screen, obscuring incoming pillars and hatches until it is too late. This turns the tunnel sections into something of a memory test -- a feature from retro games which I personally do not cherish.

3D Space Tank proves that nostalgia can be as good as it used to be.

All things considered, Tank is extremely good value. The adventure is long enough to avoid feeling short, as some download titles do, and with the optional challenges of opening all links, clearing planets of enemies and optional side-missions there is plenty to keep you entertained. Once I had completed the game, I started it again from the beginning, as the only pang of disappointment I felt at its end was actually a testament to how much I had enjoyed the game and didn't want it to be over.

For me, 3D Space Tank proves definitively that, sometimes, nostalgia can be as good as it used to be.

[Chris Jarvis writes the Novel Gamer column where you can read his 3D Space Tank fiction.]


You can support Sinan by buying 3D Space Tank / X-Scape