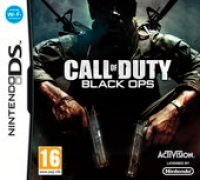 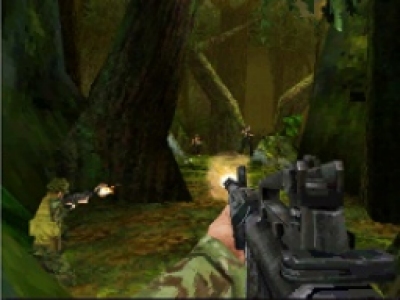 Call of Duty Black Ops is another strong first person shooter on the DS. Its varied environments and meaty shooting mechanics give GoldenEye DS a run for its money although I did miss Bond's sneaking about.

Call of Duty: Black Ops reminded me of playing games quite some time ago. That's not a bad thing, it is just telling of the technology on offer. What was different here though was the stylus control. This makes it feel more like the mouse driven experiences on the 16-bit Amiga and Atari ST than the game pad centric devices like the N64 or Saturn.

Unlike Black Ops (Wii) the DS doesn't try and exactly match the big console experience. What you have instead is a game based around key plot points and mission locations that then carves its own retelling.

Having played through the main versions, I quite enjoyed revisiting some of the themes in miniature style. But more than simply aping these grander experiences Black Ops has been scaled to the DS with some finesse.

Firstly there are many more check points than the 360/PS3/Wii version of the game. The game also keeps track of which enemies you have killed, so when you return to an area after dying they don't magically respawn - although, of course, you do.

These can seem like minor points, but for a game that you play on the move and naturally pick up and put down more frequently they make a big difference. Having to wade back through a 15 minute mission just because your train arrived at the station last time could easily eat up all of that playtime you were sneaking on the loo at work later that day.

It's here that Black Ops DS feels more convincing that on the diminutive handheld.

Weaponry is as you would expect. A collection of knives, bolt-action rifles and handguns have been scaled to fit. You can control these via either touch screen or D-pad combinations. These offer a surprising level of detail and shooting mechanics that create an assuringly weighty experience. It's here that Black Ops DS feels more convincing that GoldenEye (DS) on the diminutive handheld.

The game proceeds along linear lines. Missions come one by one and guide you down shooting galleries with enemies appearing from every corner. But unlike GoldenEye 007 on the DS there is more variety of the locations here. You start in Cuban suburbs before taking to the jungles of Vietnam.

This being a DS game there are a slew of minigames that crop up now and again. These range from lifting a beam of wood from a door to positioning your squad to defend an area from invading enemies. There's even a section where you fly a helicopter to provide supporting fire.

At work it has made my bathroom breaks a little more frequent.

Most impressive of all though, and this is where the DS out delivers any of those old 16-bit machines, Call of Duty: Black Ops provides the full suite of multiplayer modes. The popular Zombie Mode is even provided - where you're tasked with surviving increasingly hungry waves of attackers in a great little two-player co-op offering. There are also both local and online multiplayer options that can accommodate up to six players and a Challenge Mode that takes you back to missions with specific directives.

Something about the always-with-me nature of the DS game combined with the strong stylus controls to keep me coming back for more. At home it's a pleasant distraction while my other half watches Escape to the Country, and at work it has made my bathroom breaks a little more frequent.


You can support Sinan by buying Call of Duty Black Ops