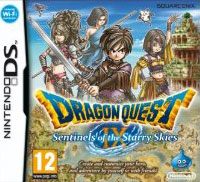 Other GamePeople columnists have reviewed this from their perspective - huh?:
Soulful Gamer (DS) 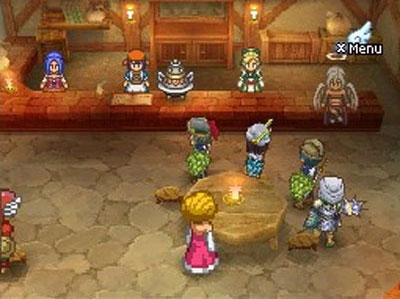 Dragon Quest IX offers the kind of simple, undemanding fun that appeals to a gamer like me who's tired of grandiose adventures that do little more than steal your time away.

I am a multitasking gamer. Sounds efficient, but it's just an advanced form of relaxing. For example, I might put a couple of hours into Puzzle Quest but at the same time I'm listening to a football podcast on my PC. Or I might play World of Warcraft while talking to someone over Skype. Give me a DS, a kitchen knife and some peppers and I'll rustle you up pasta and a Pikachu.

DS-based Japanese role-playing games like Dragon Quest IX work best as the base for the social branch of multitasking gaming. If my girlfriend is watching a high concept American psychological drama with dinner, instead of attempting to follow what's going on I'll sit next to her and play Dragon Quest IX with the sound turned down. I can slay cucumbers and slimes in her excellent company, and when the show gets a bit pretentious I can mock it and get ready to dodge a fork in the ribs.

Dragon Quest IX is perfect for this kind of multitasking gaming.

Dragon Quest IX's turn-based combat means I can dip in and out mid-battle - in fact I can just close the DS and leave it on standby. If something good comes on like QI - my kind of pretension - I can give it my full attention.

This turn-based combat is more like old school Japanese Role Play Games (J-RPG) rather than newer breeds like Eternal Sonata and Final Fantasy XIII. There's no ridiculously deep story to fathom, just your typical save-the-world jaunt where you go from town to town helping people with their problems.

There's no existentialism, politics, philosophy, or emo distractions, just dashes of wit, charm, and wackiness. I mean, you can dress up in iron platoons, a steel shield, and a bunny suit complete with bunny ears.

I primarily grew up with old school J-RPGs and the Final Fantasy games in particular. 2007's Final Fantasy XII is one of the games that got me back into gaming. I plunged days into the vast fantasy worlds of games like Mystic Quest, Final Fantasy VI and Final Fantasy X.

Final Fantasy X was a special game for me. I can remember watching on in awe as Yuna gracefully turned on the tip of a magical gusher, her dress floating on air as she twirled. I sat stunned as a huge tidal wave swept over the golden, glowing city of Zanarkand. It intoxicated me and when it ended I felt empty for days. Its magical world felt like home.

But upon my return to gaming, the huge worlds of J-RPGs have become more ambitious, more pretentious, and often less absorbing. They demanded my full attention rather than slotting in around anything else I was doing.

Final Fantasy XIII left me bitter after taking 30 hours to truly open up. Lost Odyssey suffered from a menagerie of strange design choices. Eternal Sonata was sickeningly sweet and often disinteresting. Not one of the three was absolutely awful, but when I think about how many hours I plunged into them it feels like wasted time.

I'm much happier to wander around the world of Dragon Quest IX with its smiley-looking foes, its silly little stories. Heck, I can dress up my monk in denim jeans, a wrap-around dress and fiercely sharp claw gloves. It doesn't demand me to invest so heavily in it, instead it follows a formula I know well with a few twists here and there - online co-op, customisable avatars, item recipes.

Dragon Quest IX isn't a superlative game and it does have its niggles here and there - grinding rears its ugly head once or twice - but overall it's quite hard to fault something that I've consistently enjoyed. Dragon Quest IX sticks to a mandate of simple, modest fun, the kind of unassuming fun that I can enjoy while trying to steal the chips off my girlfriend's plate. It doesn't demand hours of antisocial investment, just that I give it some sole attention now and again to plunder a dungeon in search of cat ears.

You can support Sinan by buying Dragon Quest IX: Sentinel of the Starry Skies