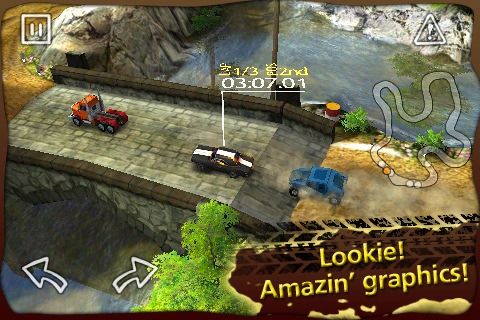 Reckless Racing's top-down driving is Micro Machines reborn for the iPhone. Visuals and game modes may be different, but for any returning gamer it's obvious to spot the same frenzied driving we enjoyed from days gone by.

Forza 3 on the Xbox 360 is pretty much my benchmark for a good racing game. The range of cars, complexity of the simulation and detailed tracks combine to create something quite special. Coming a close second is F1 2010 for many of the same reasons: all the teams, the accuracy, and the joy or driving round tracks I normally just get to see as a spectator on the TV make it well worth a look in my book.

Reckless Racing on iPhone is, to be honest, nothing like Forza or F1. For a start it's a top-down experience. The in-game physics are simple and there's nowhere near the range of tracks or cars. But for what it is, Reckless Racing is plenty of fun.

I love how 2D games are being built with 3D technology these days. 3D is often employed to try and provide an immersive experience but Reckless Racing doesn't bother with that. Instead it uses 3D to provide a good-looking top-down view of the action. It's kind of like the difference between early episodes of The Simpsons and Futurama. Futurama's 3D techniques just brought things to life, trust me on this.

When I was a lad I had a large collection of Micro Machines. I don't know why, but those tiny cars were just fascinating. I would buy a new packet whenever my pocket money had mounted up to a suitable level and swap them with my friends. I loved Micro Machines on my Sega Megadrive too, and Reckless Racing really puts me in mind of that. Whether it's because the iPhone screen makes it all look so small, or the top-down view - either way Micro Machines just sticks in my mind.

Being reminded of one of my favourite Megadrive games isn't in any way a downside.

For a retro gaming nut like me, being reminded of one of my favourite Megadrive games isn't in any way a downside; it kind of endears Reckless Racing to me and makes me look at it quite favourably.

There are various game modes available which offer different challenges. There's a straight Dirt Rally race against five other opponents, a Hotlap mode where you try to set your best time around the available tracks, or a Delivery mode that has you picking up packages and dropping them off at another point on the map. Most of my time is spent in the Dirt Rally race mode, since it's straight up racing that I enjoy the most.

Internet-based multiplayer expands your horizons too, as you get to race against any number of online opponents. I usually find online gaming to have a common flaw, though. It's the same when I play online matches in Halo: Reach. There's always someone who's much, much better than I am!

Reckless Racing's limited range of vehicles sort of levels the playing field, though. You'll never go up against someone with a vastly upgraded car that leaves you standing still. Instead, the difference is in my skill at taking corners and, well, just getting round the track quickly! The nice thing is that you can watch how your opponent does it and try that out to see if it'll improve your game at all.

Reckless Racing is perfect for a quick blast around the track

My father in law took me to Cowdenbeath football ground the other day. Not to watch the football, but to watch the stock cars in action. I was impressed at how they came round the corners sideways. This might sound like a completely random comment, but when I drive in Reckless Racing I seem to spend much more time going sideways than straight - drifting round the corners seems to be a given.

I'm convinced this isn't the most effective technique, though, as I'm really struggling on the hardest difficulty. I'm experimenting with taking the corners more slowly but just don't seem to be able to get it yet. Still, coming round sideways is plenty of fun so I might just keep trying that for now.

Reckless Racing is not a complex game, but its simple mechanics make it quick to pick up and play when you have a few moments, while the 2.5D graphics ensure it looks good. There are more involved racing games out there, but Reckless Racing is perfect for a quick blast around the track. It's just good, clean, honest fun and well worth downloading.


You can support Sinan by buying Reckless Racing