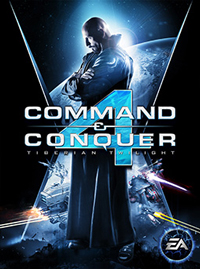 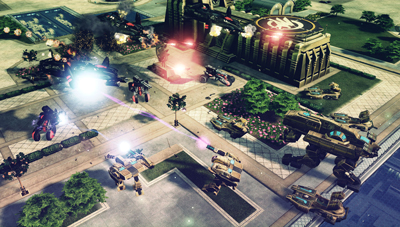 Command and Conquer 4: Tiberian Twilight is exclusive to PC again, but the base-building Real-time Strategy is lost in favour of a more streamlined tactical system similar to Company of Heroes. The new approach offers a lightweight experience perhaps better suited to the console market than the PC.

Back in the 90's when Real-time Strategy games were just starting out with Starcraft and Warcraft, Command and Conquer defined and popularised the genre with its accessible style and hammy storyline. It was the ultra-serious, full-motion-video cut-scenes that cemented it a place in my heart just as much as the satisfying way you could build up structures, acquire resources and build an army to dominate the battlefield. Command and Conquer 4 completely changes that mechanic and I was surprised to see the game ape the style of Company of Heroes so badly.

Instead of building structures and gathering resources I found myself in control of one of three mobile platforms that dispensed unit with the click of a mouse. These MCVs I remembered from the first game but these units are now completely mobile and the range of structures you can build when deployed are limited to only a few.

This fourth iteration of the game felt just like the game’s subtitle - a Twilight for the Tiberium series and not the brave new dawn it should have been.

I could immediately see the appeal of this approach and the way you can quickly produce troops, tanks or aircraft ensured I was straight into the action with little delay. The three platforms each had their own limited tech trees and it wasn't long before I was yearning for a more traditional RTS experience that this game had previously pioneered.

Nearly every moment I was stacking up troop or vehicle orders I kept thinking how lightweight the whole game came across. It felt like I was playing a pared down RTS made specifically for the PS3 or Xbox 360 and I'm genuinely puzzled as to why it wasn't released in those platforms instead of the PC. I know from playing Dawn of War that the non-base building RTS can be done with just as much depth and complexity than traditional games offer. But Command and Conquer 4 felt wildly simplistic even to a journeyman RTS player such as me.

It was so basic that I ended up using the same strategy throughout the entire game. Queue up a load of units whilst my MCV was mobile and then plonk myself next to my objective and unleash the units within. It became more difficult to plan this out on harder difficulty settings but it was hardly the stuff of legend that I remember from my Command and Conquer 1 days.

Maybe I'm being a little too harsh on Tiberian Twilight in this regard. It felt like a very deliberate attempt to make the franchise more approachable to casual players - players like me who had been away from the series for a long time or who were new the genre entirely. But instead of feeling eased into an RTS with tactics and strategy at its heart I felt a grand case of apathy and longing for the game to be a little bit more complex.

It felt like I was playing a pared down RTS made specifically for the PS3 or Xbox 360 and I'm genuinely puzzled as to why it wasn't released in those platforms instead of the PC.

This isn't to say the game was an absolute pushover. When I tried to take the levels a bit more seriously and plan out my attacks I found that simple things - like the pool of action points that deducted whenever I built a unit - was woefully inadequate to build an effective strategy around. If I wanted some defensive turrets, a couple of tanks and a few aircraft I had little left for anything else. On one occasion I had as few as seven units on the field because I had captured larger vehicles with my engineers that raised my allocation stratospherically over the limit.

When the game play of Command and Conquer fails then I immediately fall back to the story and I remember the first game taking itself way too seriously. The badly-acted mess it produced in 1995 actually became an entertaining feature that was incredibly entertaining to watch and a just reward for progressing from map to map. But Tiberian Twilight falls between the outrageous parody the previous games had become and the ‘so-bad-its-good’ nature of the original. The story and acting takes itself seriously but it’s acted with just enough professionalism that I was bored rather than entertained.

Instead of feeling eased into an RTS with tactics and strategy at its heart I felt a grand case of apathy and longing for the game to be a little bit more complex.

The two storylines of GDI and NOD both come with twists near the end but I never felt the game deserved to pull these off with anything like the dramatic pathos it was obviously gunning for. It almost made me laugh during the final scenes, as the story tries to pull a Matrix-like manoeuvre in its familiar cheesy style. But it was far too little too late by that stage.

My return to Command and Conquer was a disappointing exercise. The decision to remove many base-building aspects produced an experience that was dull, lifeless and devoid of the same charms the older games achieved. Though I've moved away from the traditional model of RTS' in recent years, I felt that if any game should stick to its strengths and carry on a classic form then it would be Command and Conquer. Sadly, this fourth iteration of the game felt just like the game’s subtitle - a Twilight for the Tiberium series and not the brave new dawn it should have been.

You can support Sinan by buying Command and Conquer 4: Tiberium Twilight