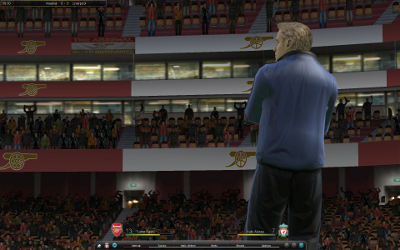 Contrary to what you might suspect, FIFA Manager 10 for the PC is one of the most astoundingly complex games I've ever played. Unfortunately, this turned out to be a problem, as the game mechanics are insufficiently explained, and as a long-time absentee from management simulations, this made it incredibly difficult for me to get into the game.

Ok, let's get one thing straight from the off, it's been a very long time since I've managed a virtual football team. The last management simulation game I can recall playing was Premier Manager '98 on the Sony PlayStation 1, and although during the interceding years I have glimpsed the gloriously addictive Football Manager series splashed across my brother's computer screen, I myself have never had the inclination to go back. Pardon my cynicism, but I don't find spreadsheets particularly exciting, regardless of how colourful they are.

Nevertheless, as I warily slide FIFA Manager 10 PC into my DVD drive, I feel a faint tingle of intrigue as I wonder how much the genre has evolved over the past decade. And I can't help but crack a nostalgic smile as the music from Grandstand blares through my headphones while the game loads.

It's like a prettier version of Excel has reached out of the screen and punched me in the face.

However, I'm taken completely by surprise when one of the first questions the game asks me is not 'which football team do you want to manage?' but 'do you want to play with simulated personal life?' Desiring to explore all the facets of the game, I naturally click 'Yes', whereupon I'm taken to another screen where I can select my marital status, how many children I have, and whether or not I'm in a same-sex relationship. By this point I'm a little confused, as I'm sure I reviewed The Sims 3 already. When do I get to start shouting at ridiculously overpaid men to kick a ball at a giant bag?

I set my managerial alias to the suitably football-y Gary McLeish, and with some deliberation set my status to single. After about half an hour of familial fiddling I get to pick my football team. This being a FIFA game, all the licenses are present-and-correct, and I do mean all of them, from the Premier League to the Hungarian Soproni Liga, though annoyingly you can't have all the leagues simulated at once unless you have a PC that can light your entire street.

I opt for my childhood local team Stockport County, and finally get to the task at hand. Immediately though I'm assaulted by a huge array of menus, options, and statistics that utterly bewilder and disorientate me. Not only are there the basics of team management, I can also recruit staff, manage advertising, search for sponsors, redesign the stadium, invest in stock, the list is endless.

I just about got enough of a grasp of the game to organise a Friendly against Newcastle, then promptly lost because I man-marked a player who wasn't actually on the pitch.

Not only is the amount of stuff on offer maddening, each individual area of management has incredible depth. Take the Transfer system. When I used to play Premier Manager 99, expanding your team simply involved finding an appropriate player, offering him a decent salary alongside a house and car and they were almost guaranteed to join. Now purchasing players requires first making an offer to a club, then organising the player's contract which includes aspects such as appearance and goal-scoring bonuses, then awaiting a medical assessment before he finally appears in the squad selection box.

This is just one example of the sheer complexity of FIFA Manager 10 and whether that's a blessing or a curse entirely depends upon your patience and love of the genre. For me, I found the menu system baffling and impenetrable, and quickly retreated to playing with formations and tactics and hoping the financial side of the game would take care of itself (which it didn't as I eventually found out to the cost of my job). I just about got enough of a grasp of the game to organise a Friendly against Newcastle, then promptly lost because I man-marked a player who wasn't actually on the pitch.

The match itself was relatively fun to watch, and the inclusion of sideline shouts such as 'dribble' and 'shoot' made me feel like I was having an immediate effect on the game. But concentrating on the matches was nigh on impossible as there were so many other things that required my attention in order for my team to function properly.

While there's definitely fun to be had with FIFA Manager 10, you'll have to work for it. I found the menu system to be overly exhaustive, with many of the options such as 'learn to play golf' rather peripheral, and the learning curve is steeper than the stands at the Bernabeu. I don't care if most of the players have retired; I'm going back to Premier Manager '98.


You can support Sinan by buying Fifa Manager 10