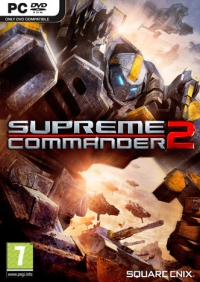 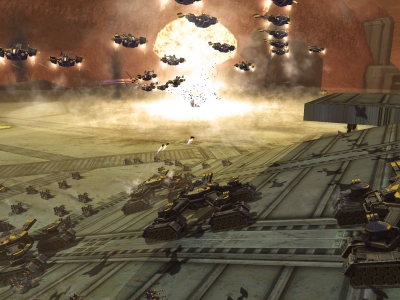 Supreme Commander 2 has good RTS ideas, but having lost too much time to stressful university life, I have to be picky about which games I'm prepared to get sucked into. Real Time Strategies have to be really streamlined to fit the bill.

As a kid, I was happy to while away summer hours playing games. While it may have been the hottest day on record, the elf princess would not save herself. The irony is that I actually spent more of my childhood outdoors than I do now.

But now Summers bring with them the re-emergence of boozy evenings. After a few strawberry ciders with a good friend at the local pizzeria my girlfriend and I drift home a little world weary from the fourth cider. I inexplicably decide now is the time to boot up Supreme Commander 2 and give it what remains of my flickering attention.

To its credit it keeps me playing through to Sunday morning. It's so hot that sleep is impossible. That and the fact I am caught in a stranglehold of bemusement at the appearance of Nolan North make me play on.

Uncharted fans may recognize this actor as Nathan Drake, but North has actually appeared in roughly a trillion video games including the likes of Assassin's Creed, Prince of Persia, and the recently released Alpha Protocol. I typically associate him with narrative-driven games that require a talented, endearing male vocal. Finding him here amongst Supreme Commander's strategy is a little odd.

Here in Supreme Commander 2, his drawl is a little lost in a sea of grunting testosterone. The baddies surely represent unused talent from the Gears of War series. To compound things, the story is trash. It's something about saving the world, protecting civilians and all that jazz, but it's hard to keep up when people throw futuristic-sounding acronyms around as if I should understand them. I don't. Even in the light of Sunday morning's sobriety Supreme Commander 2's narrative is unintelligible.

Nolan North is just a red herring though - this game isn't trying to be about story or acting.

North is just a red herring though - this game isn't trying to be about story or acting. Like Red Alert 3 of my former years it's about strategy. But happily, it's also about taking ok the staleness of the genre - and endless rock-paper-scissors choices.

Almost unexpectedly though, as the small hours drag me into Sunday, I start to really get into it. I love the zoom out function that lets you take-in the whole map. Then there's the tech tree which seems to be more of a logic puzzle than other more baffling examples. And of course there's the scope for many different attack approaches, or the depth within the skirmish mode.

But more than all these, it's simply sitting down and spending time with a fresh Real Time Strategy that I'm most enjoying. You have to be passionate about RTS's to truly enjoy them. You have to want to lose yourself in them for days and months.

But other than this brief bender, I know I'm still not someone who can really commit to all this.

But other than this brief bender, I know I'm still not someone who can really commit to all this. As someone who's lost time on gaming, and lost time on life in general, I'm already fretting about how much of the sun I'm missing.

I may prefer the turn-based strategy style of Valkyria Chronicles and Advance Wars, but I cannot deny that my time spent with Supreme Commander 2 is fun.

As good as it is though there's no place left for Supreme Commander 2 in my summer.

You can support Sinan by buying Supreme Commander 2