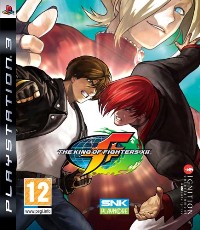 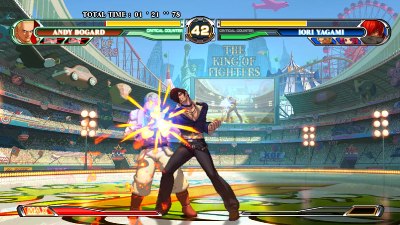 King of Fighters XII is beautiful but simply never clicked for me. Before coming back to gaming I used to think you had to persevere at games like this. But now if I don't get it, I'm happy to move on.

There's the muffle of background chatter, the occasional clink of glass against glass, the scurried pitter-patter of tunnel-visioned waiters. But between you and her there is only silence, a silence so dreadfully deafening that it pervades into every other sense. You twitch. You fidget. You nervously glance at your watch. You wonder if you are destined to never hear again.

We have all been on bad dates, but none more painful than those that finish before they begin. Not literally, of course, for that would bring a relief that is not forthcoming. No, I'm talking about the kind of date where instead of instantly clicking you instantly non-click. The two of you are not just not compatible, you're completely incompatible. As John Cleese would say, the date is bleeding demised.

My time with King of Fighters XII was a bad date. There was no click, not even an iota. The game was positively stunning to look at, exuding plenty of style in its painstakingly hand-drawn animations. It seemed a competent enough fighter, balanced, with a mix of characters and a blend of fighting styles. If King of Fighters XII was a date I'd still recommend her to friends - the misogynistic Casanova that I am.

But when there's no click with a fighting game, there's little point in pursuit. At least that's how I find it. I've grown up with the same fighting series, iconic and celebrated names like Street Fighter, Virtua Fighter, and Soul Caliber. To truly enjoy a fighting game beyond the idle fancy of button mashing, I have to put the time in to get to know the game. Just like in a relationship, it takes patience, dedication, and a fair bit of give and take for me to build understanding and trust with a fighter.

When I was younger, before my time away from gaming, I was more than prepared to give a game a chance.

When I was younger, before my time away from gaming, I was more than prepared to give a game a chance. Sometimes I discovered real gems from the virtue of endurance. Mega lo Mania on the Amiga grew from a simplistic, undemanding strategy game into a time-bending epic. Cloud Kingdoms on the same system transformed its odd top-down platforming view into a challenge full of depth. Even some of the most popular of classics like Ocarina of Time and Resident Evil are slow to start off with.

Age and time, however, have given me a new perspective on certain genres. To truly enjoy a fighting game you have to put the time in. What's also true of fighters is that they are the most regressive type of game. There's no underlying message, no challenge to convention, and no deeper philosophy. Simple, ever so immature fun.

There's nothing wrong with a little immaturity from time to time, and certainly nothing wrong with fun. But, if you're not getting any fun out of a fighting game then there's no reason to play it. It's not likely to become much more fun anytime soon.

Ten years ago, I might have given King of Fighters XII more of a chance.

Ten years ago, I might have given King of Fighters XII more of a chance. I might have forgiven its odd Japanese-accented delivery, its restrictive three-on-three arcade mode, its lack of features, and its reluctance to assist a new player. Now, I just glance to my left and see my copy of Super Street Fighter 4, a game I'm comfortable with, a game that truly gets me. I'd much rather be playing that.

And with my age I now know that I don't have to pretend to enjoy King of Fighters XII. So I take it out of the PS3 and get on with spending the rest of the evening the company of a game that really 'gets me'.

You can support Sinan by buying King of Fighters XII