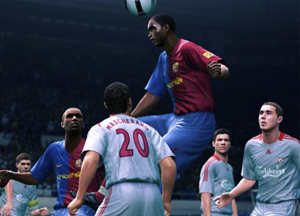 Pro Evolution Soccer 2010 on PS3 and 360 offers us the football simulation we've always dreamed off. Combining a super tactical system, along with an improved artificial intelligent back-end, PES 2010 is sneaking ever closer to FIFA - in fact, it could have finally got in front.

For as long as I can remember, there's always been an ongoing battle between two major footballing titles. Back in the day, FIFA comfortably ruled over what was then called International Superstar Soccer, particularly EA's brilliant Road to the World Cup edition. But, as time went on, International Superstar Soccer became Pro Evolution Soccer (PES) and FIFA started to look over their shoulder as PES crept in closer. The latest edition of both games has seen the tightest battle yet.

It's no surprise then that as you take a look at reviews around the gaming world, you'll spot a fair few FIFA fans bashing PES and its lack of licenses and unauthentic gaming experience. What they don't realize is that Pro Evolution Soccer 2009 boasts the most licensed teams and players in its franchise to date and the only reason Konami haven't included as much as FIFA is because Electronic Arts have secured exclusive rights to certain parts of the licensing.

It's not about the licenses anyway - it's about the gameplay. It's worth pointing out that I'm a bit of a PES fan, but I'm not obsessed. I used to be the 12th best player in the London back on Pro Evolution Soccer 2004, but I still played FIFA. Even now, I've got an open mind and I'm happy to bash away at FIFA 2010 with some mates and still enjoy it. That gives me a unique advantage because I've actually played both games and find that FIFA is good, but PES 2010 is just so much better.

I've actually played both games and find that FIFA is good, but PES 2010 is just so much better.

This years edition of Pro Evolution Soccer includes a brand new AI system, meaning each team will play just like their real-life counterparts; something I instantly found to be true when I played against Barcelona and the untouchable Messi. Players off the ball happily run around and find space, especially the more intelligent players such as Rooney and Giggs. PES 2010 brings an authentic gaming experience, and makes you feel just like the team you are playing with. If you can master the new tactical sliders and play to your teams strength, you'll instantly see a difference.

For example, whilst playing in the Champions League as Liverpool (which is now implemented nicely into the Master League, along with the Europa Cup), I left all the tactical sliders where they were. I was playing okay, but I wasn't finding Gerrard in the long-shot positions I wanted him to. So I played around with the sliders a little. At 1-2 down against Barcelona in the second leg of the semi-finals, I found myself really struggling. I quickly went into the settings and changed the tactics once again, this time getting my star player Gerrard up the field and into a goal scoring position. Within five minutes, during injury time, the ball fell to Stevie and I smashed an absolute bullet into the top corner to level the game and take us to extra time! By mastering the tactics, I was able to recreate the football that Liverpool play almost every week. I haven't seen or done that in FIFA yet.

By mastering the tactics, I was able to recreate the football that Liverpool play almost every week.

Let's get this in perspective though, PES 2010 isn't perfect - but neither is FIFA. Whilst PES doesn't have as many licenses as FIFA, nor does it boast anywhere near the level of competitions that FIFA musters, it still delivers on the gameplay front. The revamped master league brings in a brand new element of enjoyment with PES now, and will quite easily take away hours of your life whilst you tactically manage your team, their performance and their overall monetary income. The new additions include a full managerial experience. No longer do you just play to update your player stats, as now you have to include your team in the Champions League and Europa Cup, you've got to manage your overall teams performance and income by securing big sponsorship deals and also keep an eye on your youth team and put money into developing those players. The league also includes real currency! (It's the small things that count).

So does it hit the mark? Well, PES 2010 is superb and the gameplay is just tipping FIFA at the moment. FIFA can boast about it's licenses all it likes, the gameplay just doesn't match up to PES this year, and with Konami squeezing the licenses out as much as they can without getting a law suit from EA, could this be the year that PES finally gets its nose in front of EA's license hogging title? I think so.

You can support David by buying Pro Evolution Soccer 2010