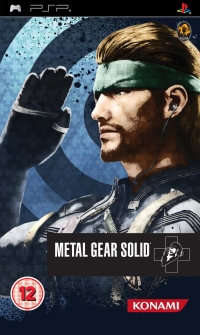 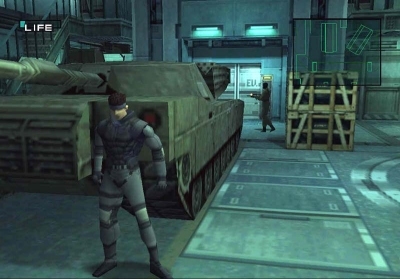 Metal Gear Solid was a breakthrough game on the PlayStation one, but without any significant updating it suffers badly on the PSP. It's still a great game, but one for those who remember playing it first time around on the original PlayStation hardware.

1998's third person action adventure Metal Gear Solid by Konami is the game that popularised the concept of stealth based gameplay and birthed a genre. Without its influence gamers would, arguably, never have had the pleasure of stealth games such as Hitman, Splinter Cell or Thief.

But that was last century and while I was away it seems that gamers quickly tired of pussyfooting around. Turns out, all they want to do now is to overcome their enemies graphically and violently. So recently stealth as a genre has become something of a dirty word in video games. Recent successes like Bulletstorm, Gears of War, and Duke Nukem Forever are currently leading the charge in a torrent of all-out, gung-go, run-towards-the-enemy-screaming experiences. Even Metal Gear's latest instalment Metal Gear: Rising, has sensed the changing wind, having recently seen its development taken over by Platinum Games; the studio responsible for Bayonetta and Vanquish; two very high octane video games in which hiding behind a box is tantamount to suicide.

But despite the trend towards ultra-violence, Konami and Sony made the bold move of bringing Metal Gear Solid to the Playstation Store for PSP. The Japanese goliaths are evidently still confident that Solid Snake's original Playstation adventure still has a place in today's gaming landscape.

A possible nail in the stealth genres coffin was that, in this multiplayer era, being an agent of stealth is a solitary pursuit not lending itself to cooperative play. Accordingly this re-released Playstation Classic offers no such multiplayer thrills, being, as it is, a carbon copy of the 1998 original, albeit shrunk down to PSP size.

In fact, unlike Zelda Ocarina of Time (3DS), nothing new whatsoever has been added to this ageing relic; no effort has been made to improve the control interface; selecting a weapon, particularly during the heat of battle, has been rendered clumsy and unwieldy, bizarrely requiring the player to reach across the screen obscuring the action while trying to press four buttons at once.

It's has not been streamlined or adapted for the PSP in the slightest.

It's has not been streamlined or adapted for the PSP in the slightest. Case in point is the 1998 anti-piracy measures. You see, Konami hit upon the idea of hiding a crucial piece of information that was required in order to progress, on the CD case itself. No official game case, no chance of completing the game. Obviously the 2011 downloadable version of Metal Gear Solid has no game case and you can see where this is going. Admittedly it only took two minutes to use the Internet to find the information but, come on, I really shouldn't have had to leave the game just because of a lazy console transition.

The boss fight with Psycho Mantis also highlights Konami's disinterest in renewing their game. Thirteen years ago defeating Mantis required a little out of the box thinking that no player had previously had to contend with. You could not beat the mind reading Mantis because he could predict your every move. The solution was to remove the Playstation control pad from port one and plug into port two. Psycho Mantis is no longer able to "read your mind" and is rendered powerless. Absolutely, bloody ingenious. It was little touches like that that made Metal Gear Solid such an innovation and stuck so fondly in players' minds.

But that ground breaking gameplay deviation comes to nought when transferred to the PSP. The concept of the solution doesn't make the slightest bit of sense; the PSP is one unit, with no removable parts. The player who has never played this version of MGS before would be forgiven for finding Mantis completely unbeatable and giving up there and then. The player who, on the other hand, has previously beaten Mantis then has to figure out how it is even possible to change the controller ports on a console that has none. It's possible, obviously, but requires another five minute break from the gameplay to figure out how.

So, who is this reissue intended for? Gamers who have never played before will quickly tire of the obtuse puzzles with no obvious solution like the ones described above (and there are more where that came from). Players who played the game first time round have already seen all there is to see. But, like I said earlier, returning gamer my memories of it are still fond.

I still found the story engaging.

I still found the story engaging; one man infiltrating a nuclear facility to disable a weapon capable of launching a nuke (the titular Metal Gear) and bringing the terrorists responsible down one by one; alluring characters with fully fledged back stories; and some truly epic battles that deserve to be fought more than once. I was willing to forgive its shortcomings because I knew what rewards Metal Gear Solid had in store for me as I progressed.

Shortcomings such as scrappy graphics that have not aged well, a sedate pace by today's standards and a story mode that can be completed in around twelve hours don't do Metal Gear any favours.

But more than these headlines, its more the general lack of care and attention, and price (GBP 7.99), that will probably keep all but the most sentimental away from this. In a stealth move worthy of Solid Snake himself, Metal Gear Solid snuck into the Playstation store unnoticed among bigger, more visceral action adventures and from what I can tell it looks destined to lurk in the shadows of gaming history. Maybe that's just the way Snake likes it.


You can support Sinan by buying Metal Gear Solid