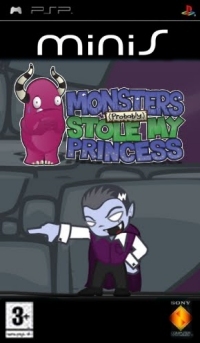 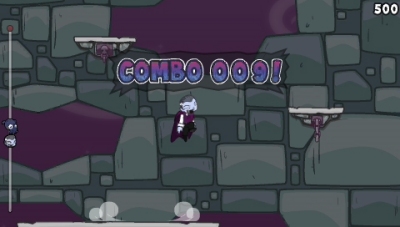 Monsters (Probably) Stole My Princess is an incredibly charming game with an equally charismatic lead protagonist, The Duke -- who is economically and effectively controlled with just the D-pad and X.

Try to imagine a nine year old wearing a vampire costume complete with cape and Bela Lugosi expression, strutting about the house, hands on hips, striking Awesome poses and generally feeling he is the centre of the universe.

That's The Duke, and at the beginning of each of the five levels he will point dramatically at a monster that he is sure is (possibly) up to no good, lightning will flash and the (probably) evil monster will stand accused of stealing The Dukes' princess.

Rewind the gaming clock. Back 22 years to 1989. It's 11pm and Tetris won't let me sleep. Oh, I'm not playing it. I switched the Game Boy off just before tea and it didn't enter my mind while I was eating my bowl of mashed potato and corned beef (with pickle halves mixed in).

Beadle's About, post nourishment, also provided enough of a distraction to fend off thoughts of those falling blocks. But now, lying in the half-light of my bedroom, posters of the A-Team and Linda Lusardi barely lit by the sodium-orange glow of the street lamp filtered through Masters of the Universe single lined curtains, I am alone with my thoughts.

As I stare at the constellations on my ceiling it starts to happen, just as it does every night; blip blip blip in my head. This is much more threatening than a thousand Space Invaders. Closing my eyes doesn't help; the obsessive side of my brain clearly has issues with the side of my brain that needs its sleep and it recreates a perfect counterfeit Tetris environment on the back of my eyelids. It's got me; I'm playing the game again. It's inside me.

The Duke's laughter is still ringing in my ears as I pad towards the bedroom door.

Fast forward to 2011: it's 3am and The Duke is cackling his cocksure cackle. It debases my eardrums, just as Tetris strained my eyelids all those years ago. His overconfident, self-satisfied sniggering infringes upon my sanity and guarantees another restless night.

I sit up and look at the wall; seeing through it into my two year old son's bedroom I know the PSP Go is right where I left it. On the table next to the easy chair where I sit while I'm putting my son to bed. I know the charge light is blinking in rhythm to the pulsating organ in my chest. Like Poe's Telltale Heart, I'm afraid the pounding in my ribcage will give me away as I slide my legs from under the covers and flex my toes on the bedroom carpet.

The Duke's laughter is still ringing in my ears as I pad towards the bedroom door in the darkness. He is rejoicing in my failure as a gamer and I must quiet the laughter. I know of only one way to do it. I have to beat my high score.

And, so it is tonight, as it has been on previous nights and as I'm certain it will be over and over again, that I sit next to my sleeping son, PSP Go in hand, having another compulsive turn at toppling my previous total.

That's where the appeal of this Playstation Mini title lies. The story mode is probably the shortest story you will ever hear; I completed it in ten minutes flat. I sat back after my first run through and felt disappointed that this little game was over so quickly even if it was only GBP 2.99. So I snapped my PSP Go closed in a huff and forgot all about The Duke and his quest to find his missing Princess. Not for long though.

Each level is a vertical chase as you chase a variety of different enemies. The monster always has a head start and climbs the level fairly quickly. You need to be light on your toes to catch up and strike him; three strikes and the (more than likely) guilty monster falls to the ground, defeated.

It is here, in this simply mechanic that the game becomes really addictive.

With the princess nowhere to be seen, the next level is reached, and a new monster accused. You get faster with each successful platform jump and should your combo be sufficiently high you can use a special headshot attack with wonderful consequences (that I won't ruin for you here).

The more of the floating platforms you hit the louder the Duke's laughter gets and the more dramatic the gothic pipe organ soundtrack becomes and, most importantly, the more your score rockets.

It is here in this simple mechanic that the game becomes really addictive. How many platforms can you hit before the monster reaches the top? How breathtaking will this defeat be? And just how much more Awesome will you feel when, after two minutes of frantic button bashing, you can sit back and know that that score cannot possibly be bettered? Until the next time.

Like Tetris of my youth, Monsters (Probably) Stole My Princess works a simple seam of addictive gameplay, and offers a reason to play it over and over again.

It's 3am now and the Duke is still laughing at me. But I know just how to shut him up; just one more game.


You can support Sinan by buying Monsters (Probably) Stole My Princess