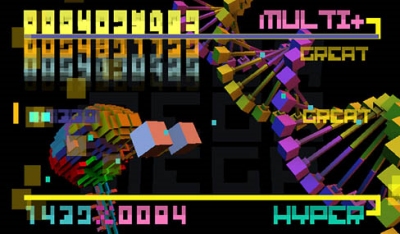 Bit Trip Core Wii-ware is a game like I used to play. Incessantly difficult, unforgiving and hugely addictive. Without the kudos of Halo'2 legendary setting, but no less hard - this is the perfect challenge for those of us raised on no continues and save points.

"It's almost like a rhythm game," my girlfriend ponders as I head-bop through the opening level of Bit.Trip Core.

"It is a rhythm game," I correct her smugly.

It would seem a wise statement but for the Game Over screen's comedic arrival seconds later.

It's not so much wisdom as that I already know what to expect of Core, the second entry in the Bit.Trip series. Debut entry Bit.Trip Beat distorted the basics of Pong into a weird, complicated music game. Blocks came right to left at the paddle and each time you successfully hit one it produced an 8-bit musical note. This procedural chip tune music overlaid background electro to generate a really gratifying retro-modern mix. But it wasn't just musical Pong; it was a rhythm game.

Bit.Trip Beat was tough - within minutes there were blocks coming at you at different speeds, blocks that hit the paddle then boomeranged back at it, blocks that suddenly exploded into smaller blocks, and even blocks that abruptly stopped before coming at you with barely a warning. The key was to approach it as a rhythm game and try to recognise block patterns, not react to them. This was the compelling base for fun, appreciably punishing play.

So, while second game Core is ostensibly more akin to a tower defence game, the only way to approach it is as a rhythm game. Except this time in place of the Arkanoid paddle is a D-pad in the centre of the screen - corresponding to the D-pad on the Wii-mote. Press 2 and left to shoot a laser to the left to take out blocks with. Press 2 and up, it shoots up. You get the picture.

The binary interactions here are a sharp contrast to Beat's tilt controlled paddle. For some this analogue interaction was a step too far - although I loved the nuanced touch the controls offered you at breakneck speeds. No such excuses can be used with Core, though.

Core also opens at a more pedestrian pace that Beat. I'm surprised just how easy the opening levels are - it takes me just two tries to complete, Beat's took me at least 15. But soon the familiar steep learning curve kicks in.

I expected that having the whole screen to deal with in Core (rather than just Beat's left side) would present a harder challenge. However, by limiting me to four possible locations Core becomes simpler and more direct. This places more focus on timing - tied implicitly to rhythm.

It starts off slow, gentle and simple in its first half - an 8 by 4 of red blocks on the left, a few clockwise blues, nothing too stressful. Then out of nowhere a barrage of lightning quick blocks. An army of greens flash past my down laser in disarming zigzags, while above my top laser misses one blaze of orange after another. Then into the familiar black-and-white last chance saloon of the Nether, but I don't even get close to getting enough blocks in time to escape back into colour. Game Over - this is more like it.

Core's second level is right up there with Beat's viscerally impossible third. There's an underlying rhythm, but it's hidden beneath the stunted, off-kilter movements of the blocks. There are just too many things moving too quickly to see through the mechanic quickly. And when the blocks hunt in packs they can rapidly deplete your health to zero. Even with the smart bomb, these profuse, rapid bombardments are not letting up.

17 tries later, I finally make it through to the boss. It takes just 45 seconds for the Game Over screen to revisit.

It is awkward, knotty, and total evil.

Carrying on from the many old-school references in Beat, Core's second level boss harks back to the classic 80's Missile Command. Here though, the missiles don't slowly drop from the sky, but carry blocks towards bases in all directions and speeds. It is awkward, knotty, and total evil. After being so careful over ten minutes to reach this point, seeing my bases obliterated so quickly is thoroughly demoralizing.

This is where mileage with Bit.Trip games will vary - especially with Core. Being sent back to the beginning of a level is as outdated as Missile Command is a poison some will devour and others will hate.

Core is as fun, unique, addictive, and difficult as Beat was. And legendary challenge aside, there's so much to love about this series. The futuristic background visuals up against the Atari-like overlay are so distinctive and alluring. As odd and enjoyable a mesh as the mix of retro and modern electro music is. Bonuses like the multi-beam and the ultra-beam lasers no only mix up the play but sound fantastic.

It is awkward, knotty, and total evil.

The best addition though, is Hyper mode. Core takes Beat's Mega mode one stage further with this second tier bonus mode that offers even more points. But it only takes one missed block for it to end and return you to Mega.

As good an addition as it is, by making the collecting of points a more appealing, challenging proposition it emphasizes how much more longevity the series would have if it had online leader boards - just look at what that's done for the Geometry Wars series on Xbox Live. We still wait for these leader board though - there are none in third game Void and none expected for fourth game Runner.

Core takes the old school challenge of Beat and riff's with the idea some. Although it still feels similar - the skills and rewards here are suitably different. Played on its own is fun - play it amongst it's Beat, Void and Runner siblings and you have a family of super tough games that will test even the most talented of gamers. Particularly those returning to the fray from the dark arcade drenched challenges of the 80's and balk at challenge killing features like continues, save points and rewinds.

You can support Sinan by buying Bit Trip Core