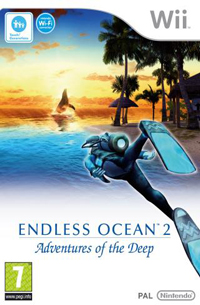 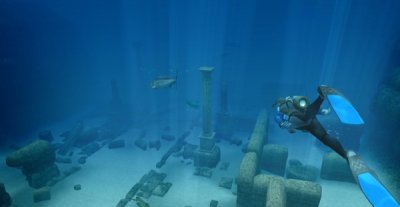 Endless Ocean 2: Treasures Of The Deep is an alternative RPG as well as casual underwater thrill. The follow up to Endless Ocean: Blue World ads some drama while keep the basic laid back premisce the same.

Having missed the birth of casual gaming and avoided what I'd call kiddie and girlie games, the prospect of Endless Ocean 2's diving didn't exactly fill me with excitement. Previous to this game, the nearest I ever got to exploring the deep seas was mucking about with Echo The Dolphin on the Megadrive and the very basic Scuba Dive back on the Spectrum 48K. Neither of which held my attention for very long. So I was expecting to surface from Endless Oceans 2 faster than a lungfish could empty a full tank of air. Six gaming hours and three real time days later, however, and I am chowing down on those words with fervour.

In a nutshell, you play the part of a young, inexperienced scuba diver who has taken a job with a diving company in order to learn more about the mysterious Song Of Dragons. This is your main mission, to uncover the clues that will lead you to perhaps some ancient treasure, perhaps something else. Six hours in and I'm still none the wiser as to what it is exactly I'm searching for. But then, I have been side-tracked.

As the game unfolds, new side missions open up - heal sick animals, find and photograph fish, guide tourists around. Some have more danger than others, uncovering salvage for treasure hunters or mapping entire diving zones, and these are the ones that bring in more money - and unlock more side-missions. Then there is the completists desire to catalogue every animal in the game, train your own dolphin, befriend other intelligent aquatic life forms, pretty up your island base, manage an aquarium and even create your own private reef.

And all of it is done at such a genteel pace that after all those hours I still feel as if I've only just scratched the surface. But one thing I do know is that this isn't the diving sim that I first thought it to be. Endless Ocean 2 is actually an RPG cleverly disguised as a relaxing underwater calm room.

Every time you perform a hitherto unknown task you are rewarded with a new title. Mixing and matching these titles may unlock rare items. I've mixed and matched them - frog duck, fearless ibis, blue man - but so far nothing special seems to have happened. But that's not the point; I've played something like this before, Dark Cloud, a dungeon roaming RPG in which mixing weapons together could create even more powerful weapons. And Dark Cloud was always labelled a Zelda rip-off.

The point is that if you close your eyes and just listen to the music, it sounds just like a Japanese RPG. So it follows that if you want to dive deeper and longer you need to get your diving license level up, which means diving as much as you can for as long as you can. To simply follow the main plot is impossible as there are times - you'll have to go off on an errand to progress. Not that that's a criticism, just that it took some time to sink in.

It's a strange sensation, a slow dawning of what's really going on - I must perform a multitude of tasks simultaneously to move through the game successfully, just as I'd I would in any number of regular, sword swinging RPGs. But in Endless Oceans 2 the only weapon at hand is a pulsar that you can zap dangerous sea beasts with if they get too close for comfort. On the other hand, this pulsar can also be used to heal sick animals - at one point I inadvertently heal ten Great White sharks one by one as they line up to bite me.

Healing sick animals is an easy way of making cash and seeing the different diving spots at a more leisurely pace. Equipped with the pulsar, you just have to swim around until a sick fish pops into view then give it a few zaps. Or you can browse the seabed looking for loot, which can also be traded for cash. When you've got cash there's plenty of things you can buy, swim suits, kit, coral and reef structures for your private one, niceties for your island.

Healing sick animals is an easy way of making cash and seeing the different diving spots at a more leisurely pace.

But the part of the game I am most drawn to is the filling in of your encyclopedia. Flipping through it is just like scanning through Pannini sticker albums as a kid, seeing just how many more I needed to complete it. The chapter that peeks my interest is Deep Sea Creatures. I've yet to see any but you just know they're going to be weird, alien like monsters. For now I'm on the prowl for whales and sharks, with a few extras on the side. Anything big really.

The encyclopedia is just one aspect of this game, but it's clear from my own experience that you'll not be able to keep focussed on just the one aspect, as there are many others that are so very distracting. I defy anyone not to be tempted by dolphin training. And any player who likes to fill their pockets, just in case, won't be able to stop themselves from mapping each dive zone for the hefty rewards that follow.

I was surprised by just how much I've come to like Endless Ocean 2. Though its pace can sometimes be close to catatonic and characters practically devoid of personality, there is still so much to enjoy in Endless Oceans 2 that I wouldn't be surprised if I'm still playing this game three months from now. There is something for almost everyone contained within its digital coastline, everyone except perhaps the kind of hardcore gamer who baulks at a game if it doesn't have some kind of meaty weapon cache and plenty of guts to spill.

But for me, a man who once placed his girlfriend between himself and what he described as a sea snake and what she called a length of rope, this is the closest I'll ever get to scuba diving. It's a panic free, seabed roaming RPG with Tomb Raider like puzzle solving and buckets of casual gaming extras that has seen my entire family drawn in with abandon.

You can support Sinan by buying Endless Ocean 2: Treasures Of The Deep