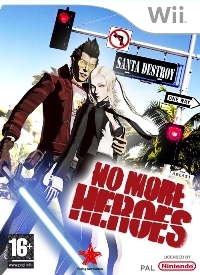 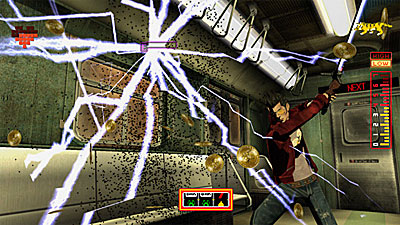 No More Heroes is clever, different and arty. But eventually I realised that its parody of bad game design is impossible to enjoy. As someone's who missed out on a lot of games, I can only spend so much time trying to like games like this.

I really dislike not finishing a game. It just feels a bit rude. No More Heroes has been sat next to my Wii for the last four or so months. Occasionally I've picked it up, thought about persevering with it, only to shudder violently and hastily put it down. I tell myself that one day the shuddering will stop, that I'll want to give it another chance.

It was the same when I used to play games in my youth, I remember Bubsy sitting by my Super Nintendo for a couple of years, completely neglected but never cast away. These days I have a job, a relationship and a house move on the horizon so there's even less time to be polite to bad games now. No matter how much I want them to be good, I've got to be ruthless.

Today my girlfriend came back from work, navigated the maze of cardboard boxes and bin bags and threw herself into the chair opposite me, legs stretched and arms limp. It's been a long day. She picks up the remote.

At times No More Heroes is even deliberately trying to be not fun.

"What are you going to watch?" I get out between mouthfuls of cold, house-move takeaway pizza. "Sex and the City," she smiles.

No, no, no. Sure, secretly I rather like Sex and the City and its witty feminist horseplay - in small doses. I am but a man. But she's been watching it every evening for the last week or so. This has to stop.

"But I was about to play No More Heroes," I bare-faced lie, brushing off the dust gathered on its box. "Oh," she looks bemused, "Wasn't that the game you hated?"

"Pretentious rubbish, yes." I blurt out before taking a pause and thinking how to reply. Silence. Nothing comes. She quietly, with a hint of totally justified huff, picks up her laptop and saunters out. I've made my bed and now I have to play No More Heroes in it. I haven't thought this through.

Maybe it's not all bad though. I'm a big fan of the Games as Art debate, and right at the heart of this are games like No More Heroes - games not just about fun, but instead providing commentary, statement and meaning.

At times it's even deliberately trying to be not fun. There's the pernickety driving round the city to get to levels just like Grand Theft Auto. Then there's the procession of repetitive enemies, a feature most games are guilty of. And not forgetting the mundane moneymaking side missions not a million miles away from Zelda. No More Heroes is clever, I'll give it that.

I like how the protagonist's ridiculous name, Travis Touchdown, speaks to the Western obsession with an all-conquering hero - as does the game's title itself. And it's hard to argue with the sentiment that games have become stale, repetitive , and predictable. Coming back to games recently, I sometimes despair at the lack of creativity we see. Too much playing safe.

I'm older, I'm tired, and I don't have time to indulge No More Heroes' clever awfulness.

As I play I realise No More Heroes is on my wavelength. The problem is that I just don't want to play it. Five minutes in and I'm rocking back on forth on the chair, rubbing my temple, and muffling a subdued scream into the collar of my t-shirt. I hate playing this game. For all it's artistic connotations, this just outright stinks.

I'm older, I'm tired, and I don't have time to indulge No More Heroes' clever awfulness. I take it out the Wii, put it in the box, and place it far away. Maybe I'll send it to someone I don't like.

Back into the bedroom I curl up beside my girlfriend and let out a little groan of immobility. "What are you watching?"

"Sex and the City. Miranda just spanked this guy."

Entertainment should be easy to enjoy. Even if you are a little ashamed of it, you have to go with what you like, rather than something you want to like. No More Heroes made its point, but that doesn't mean I like it. It's a clever game, maybe even an important one, but I won't be finishing it anytime soon.

You can support Sinan by buying No More Heroes