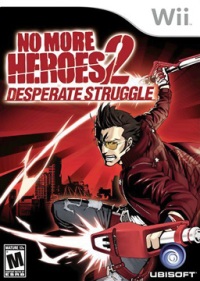 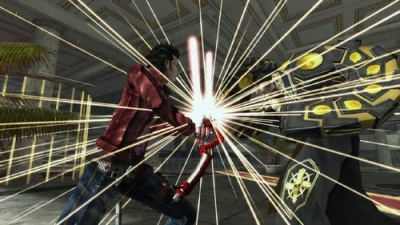 No More Heroes 2 is witty, entertaining, and delivers a resonant message on game design. After my time away from games, I'm happier not to judge a game on what came before - the first No More Heroes and all its frustrations.

The best way to get excited for a sequel is to play its predecessor. Unless that predecessor is so mind-meltingly awful that it makes you want to burn it then dance around its smoldering, toxic remains.

No More Heroes would've received this treatment but for laziness and a lack of matches. In my second wind with gaming I'm far less willing to tolerate a game I dislike. No More Heroes' poor design may have been deliberate, all with a measured statement on games design in mind, but the statement it imprinted on me was frustration and boredom.

A sucker for punishment maybe, but with my sitting room more cardboard than plaster - the fun of a protracted house move - I need a distraction from playing Tetris with my belongings. Friends assure me that it's better, but these same friends liked the first game so I'm a little apprehensive.

No More Heroes 2 immediately has me in stitches though - and in a good, not angry self-inflicted way. After a melodramatic opening, its spiky haired hero appears only to tell me, the impatient, blood lusting player, that I can't start the game until he goes to the toilet. I nearly laugh lemonade all over myself, not bad considering the first game could barely make my lips curl.

At times No More Heroes 2 immediately has me in stitches.

The clumsy driving that plagued the first game has been eliminated, replaced by a friendly list of selectable locations. Also gone are the mundane side quests, now replaced with charming 8-bit missions that are - thank God - not mandatory for progress.

Repetitive enemies remain somewhat, but the endless lurching of copycat foes is diminished by new special abilities. I can become super quick, or able to dispatch foes with a few shakes of my lightsabre-katana, or I can turn into a tiger that kills with a single, rumbling gnaw. The brawling that makes up a typical No More Heroes 2 level only tires once or twice, which again is a huge improvement on before.

When my girlfriend gets back returns, bags in hand, and realises nervously that I'm still playing No More Heroes 2 she seems relieved to see no broken controllers or cardboard devastation. Wondering quite why I'm still playing she sits down.

"Looks like fun," she whispers as she leans up against my left arm.

I know, I'm not a nice person when I'm playing a bad game, but I should also admit I'm not much better with a good one. No More Heroes 2 has me entranced. My domination of the couch is the body language equivalent of a Do Not Disturb sign. In my mind, there are no boxes, just light-beam katanas, tigers, and bloodshed.

No More Heroes 2 has me entranced and I don't want to be disturbed.

After going through the Power Rangers style boss fight, then tearing through an American football star and his cheerleaders, No More Heroes 2's overriding message hits early - games are violent. No More Heroes 2 makes its point through Tarantino-like violence and obscenely ridiculous set pieces, with the irony not lost of this all taking place on Nintendo's cuddly little white box.

When I finally switch it off I realise it's dark and my girlfriend is asleep. I'm glad it found a way to present that message without making me want to hate it. The best way to get a message across is to say it with a smile - certainly better than simply replicating what you're trying to mock like the previous outing. No More Heroes 2 gets away with what the first game failed to do becuase of its cheeky swagger and subtle knowing grin. When it pokes fun at other games you're laughing with it, not at it.

Coming back to games, I may have less time for games I don't like, but I'm also willing to give them a try before writing it off. No More Heroes 2 proves that a franchise can change its spots, its charm, humour, and depth of world. As I rise blurry-eyed and make for bed, a rogue cardboard box full of books, a stubbed toe and a storm of swear words prove that my foul-mouthed spots aren't going anywhere.

You can support Sinan by buying No More Heroes 2