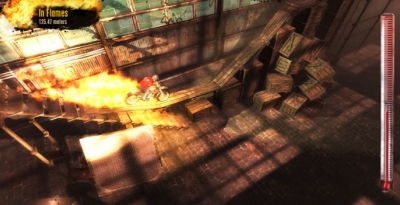 Trials HD XBLA hooked my bike riding glands as I kept coming back to throw my little biker guy into one more crash test hell.

As I sat playing the first few levels of Trials HD, I was worried that I was going to find the whole game boring, and I wasn't sure if I would ever be motivated to keep playing.

That all changed quite drastically though, just 15 minutes later. I'd worked my way up to the slightly harder stuff, which required a bit more skill on the controller. I was enthralled - everything about Trials HD was making me want to play it more and more.

Well, nearly everything. The fact I crash every time I finish a stage puts the dampers on things a bit. It was funny the first few times, and if I'm feeling a little vindictive, it's great. I find myself cringing as I progress through the game and career uncontrollably towards panes of glass, explosives, or any manner of other dangerous things.

Although dangerous things at the end of every level isn't quite my cup of tea, that doesn't mean I don't enjoy the danger everywhere else. It feels like a real achievement when you know you just saved your bike (and the rider, but the bike's the important bit) from imminent destruction.

For an XBLA game, Trials HD really has something to offer everyone. You can even may your own levels, although I haven't looked into too much yet. Maybe on a night when the weather's not so good, I'll save myself from a bike ride and work on making a worthy Trials level.

I love the 'rag-doll' rider. As you launch yourself over exploding barrel.

I love the 'rag-doll' rider. As you launch yourself over exploding barrels, or lean perilously over scarily high ledges, one thing guaranteed to make me smile is the floppy, awkward movements my little chap makes.

He also pulls some excellent shapes if you have to bailout mid-jump. I don't mind that it's not very lifelike, I think the jaunty actions of the rider suit the game perfectly.

As I became more and more absorbed by Trials HD, I began to realize that one of my favourite parts of the game, although small, was the noise of the bikes. Each bike sounds a little different as they would in the real world. This little touch let me get deeper into the game and reminded me of biking around myself.

When I'm cycling, it can be quite busy with traffic. Something I always notice on my bike is the noise of each engine that goes past me, and the sound of the motorbikes in-game started to bring back some memories not only of all those different engine sounds, but of the sights and smells from my frequent cycle routes. Not all games have this affect on me, but I like it when they do.

I get satisfaction from customizing things in my games (as well as my bikes in the real world), I was looking forward to getting stuck in with Trials HD. I enjoyed dressing up my fellah in different outfits and colours. I would have really liked to had the choice of a girl character too, but I guess you can't have everything.

I love the 'rag-doll' rider. As you launch yourself over exploding barrel.

You can customize the bikes too and really make them your own. Each part can be painted, and there are a variety of models to choose from. I spent far too long messing around, making all my bikes look the way I wanted.

Trials HD is an addictive little game. I've got many hours out of Trials HD already, and I'm sure I'll be spending more. And it's not just suitable for the big kids. My boss's toddler seemed to have no problems playing Trials - in fact she could probably teach me a thing or two.

You can support Tim by buying Trials HD