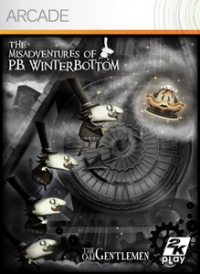 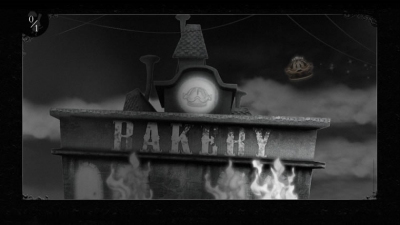 Winterbottom's off-kilter rhyming world of pies ensures that even its most complex levels are fun. It reached for laughs rather than intellect to keep me playing, something I preferred to overly worthy games like Braid.

I was a little skeptical about how good a game called Winterbottom could be, but it turned out I didn't really need to worry. Although it has its fair share of stress-inducing areas, these are more than compensated for by some very funny moments.

There are so many things that make this game unique and awesome, it's hard to know where to start. The first things I noticed was the black and white visuals and introductory short films that look like they belong in an old silent movie - a rhyming top-hatted reimagining of a silent movie. It sets the quirky tone of what is to follow perfectly.

As I started to get the hang of the controls, thanks to the hilariously cheeky prompts (I distinctly remember buttwit being used at one point), I relished the challenge of each level. And even when I got so stuck that I had to turn off the TV and do something else for a while, it wasn't long before I came scurrying back. Some swearing occurred, the remote was thrown to the sofa several times but I always managed to get through it and work things out.

Winterbottom uses the idea of clones. But more than simple duplicates you smack these automatons to get them to fly across the screen. The slapstick humour of the sound and animation was a perfect fit to the Chaplin feel of the game. I was giggling for hours, in fact I even re-did some stages just to have fun with all the copies of myself running round the screen doing random things.

Unlike Braid, where its cleverness is hard work for the player, Winterbottom made this work amusing.

I liked the clones because of the amount of thought it takes to work out how you need to use each one in order to obtain your goal. Unlike Braid, where its cleverness is hard work for the player, Winterbottom made this work amusing. Even though I found myself ridiculously frustrated at times, I always wanted to keep going and get through the awkward levels.

The self deprecating wit and humour was refreshing and seemed to appeal to everyone in my family, not just me. By the time I was approaching the end, pretty much everyone had had a go on it.

Although Winterbottom is the kind of game you can leave alone for weeks and pick up again easily, we couldn't help ourselves finishing it in a few sessions. It was a little bit like a puzzle left on the sideboard - everyone who passes can't resist trying a few pieces and it's soon finished.

It feels mature but still silly enough to get everyone laughing.

From an adult perspective (honestly, I am a grown-up underneath all the girly-ness), Winterbottom is a really engaging. It feels mature but still silly enough to get everyone laughing - who could resist a crazy little world full of pies.

I became more than a little fond of Winterbottom and still go back to it if I'm in need of something to take my mind off the day. With its clones and intricate patterns of pies, I'm sure I will be enjoying Winterbottom for a long time to come.

You can support Tim by buying Winterbottom