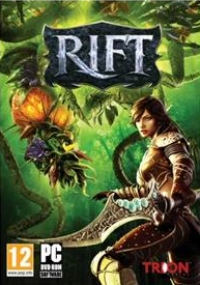 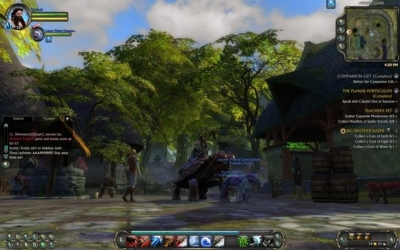 Rift managed to distract me from bike rides and Yoga training long enough to submerge me in its engaging hammy world of dramatic deaths and beautiful landscapes.

I've never really been a PC gamer, much less one who gets into Massive Online Games (MMORPGs as they cool kids call them). In fact, I have a healthy dislike for people who spend all day every day on things like World of Warcraft. So when I grudgingly agreed to give Rift a try a few months ago, I was expecting to create a character, have a quick run around and then get back to my Yoga training and cycling. Turns out that my character is now level 33 and is doing pretty well for herself on her French PVE server.

There are plenty of reasons why I've ended up enjoying this game so much, and I've come to understand how people can lose hours of their life to games like this. It's very rare that I've felt so drawn in to a game, with only a few console games giving me the same feeling.

There is something for every gamer in Rift. The initiated amongst you will understand that choosing the right server is important. PVP servers, PVE and even RolePlay Enforced PVE: of course, you can also check out servers in languages other than English. I decided to change to a French PVE server after finding out the hard way that I really, really suck at PVP.

The reason for French? Well, I thought I might as well give my language skills a bit of a boost if I was going to while away the winter on a PC.

Something else which makes Rift so appealing is the diversity of the game -- although I have somehow managed to get myself to a respectable level, my last few hours of gameplay haven't been running around killing things to get more experience. Instead, I took a chance to learn some new in-game professions.

After attempting to be a Runecrafter and Apothecary from the beginning of the game, I finally gave up on these and swapped to Butchery and Outfitting. Maybe it's just me, but making clothes out of the vicious beasts you've just killed is far more interesting than scratching some magic stuff on stones.

However long I've been gone for, everything has a nice familiarity to it when I return.

The fact that I can quite happily wander around learning these things from scratch at this point in the game really does impress me -- I'm the kind of girl who doesn't always take much interest in killing things just to gain experience.

On top of these professions, which are really just a side-line to the main game, you can also swap between different Souls in your chosen calling which is great if you want to play around with your character's abilities.

At first I played Rift as a bit of brain-candy between work, yoga and biking -- something to help me relax. But as I started to get more involved in the game I really began to enjoy it.

Some weeks, I will play a couple of hours every few nights. Other weeks, I won't even think about playing. The beauty of the game is that however long I've been gone for, everything has a nice familiarity to it when I return (and I always do).

I also like the world you play in, the scenery around me. Rift really is a fantastic game to look at, so much so that I will often rid from place to place on my funny looking steed instead of using the porticulums (think teleportation in antique framing) just so that I can look at the sea below me, or ride over the snowy hills and through a desert.

For a game that makes me kill things in a variety of ways (spells, bow and arrow, mace -- you get the picture) one of the most amusing aspects of Rift is the final flourish that a lot of the human-like characters go for when they die.

Not just a bog standard "aargh" and a fall to the floor job. It never fails to amuse me when I've killed someone and they flail around a bit before throwing themselves to the floor and expire. Think hammy, Shakespearean style acting and you'll have a good idea of what I mean.

I'm not really one for killing sprees, but sometimes I just can't resist killing a few more than necessary just to enjoy their little dramatic exits. My favourite are the Aelfwar, their skinny frames really allow for a good exaggeration.

Rift has managed the not insignificant feat of getting me into the saddle of PC gaming. Don't get me wrong, I'm still a console girl at heart, but every now and then it's nice to venture onto a different platform for a change of scenery. Particularly when the backdrops are as delightful as Rift's.

You can support Tim by buying Rift