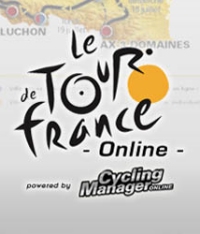 Tour de France Online promises a lot but fails to connect effort with results. Playing once a day online like the real tour is a nice idea, but in reality I'd have preferred something a little less demanding.

I'm a firm believer that games should be fun. Sure, they can be hard work and frustrating at times, but overall they should be fun. Tour de France Online is not fun. At least, it isn't after the honeymoon period is over - a few days for me.

Even though I'm hot into bikes I gave up after a week. Game lovers beware, only the most dedicated of cycling and gaming geeks are going to enjoy this one. I'm into both but soon wanted to get out and cycle the real course.

It starts well, choosing a team name and origins - a Dutch team by the name of Squashbuckle for me. Then I got to pick out my rider's vocations and select some team tactics. I went merrily on my way, happy to sit and wait as the game requested a minute or so of my time for each skill-level top up. If I knew what was coming I'd have quit while I was ahead.

Over the first few days of playing, my team were gradually moving up the online rankings (I went from 19th out of 21 teams to 11th), and was encouraged to keep playing - even though more and more time was being consumed.

The big time-gobbling monster of Tour de France Online is the skill-tree. Here you have to sit for ever-increasing amounts of time to gain skill points which you then appoint to riders to improve them.

At first, I didn't really think this was such a bad thing. I need no excuse to dawdle around online, bumbling my way through articles and getting in some serious bike related shopping. Waiting for my skills to be topped up was an excellent excuse to do both of these things, for a while.

I rushed home from work the next day expecting to reign triumphant.

After a few days though, I was getting bored of waiting fifteen minutes or more to get just a few more points to try and make my team the best of the bunch. No such luck.

After three and a half hours one evening doing everything I could to make Squashbuckle into the speed-demon, mountain-devouring cycling team of my dreams, I was really looking forward to finding out how I would do in the next race.

I rushed home from work the next day expecting to reign triumphant. But you can perhaps imagine my shock upon seeing that in fact I was heading back down the rankings, with all of my team doing considerably worse than they ever had before. I mean, seriously, if I spent that much time and got worse, how much time was everyone else spending on this thing?

Any more than those three and a half hours would drive me batty. And, frankly, I have a life which I would much rather be getting on with than spending entire evenings ordering round a bunch of imaginary lycra-clad men.

At this point, my love affair with Tour de France Online - which had been steadily taking over all time outside of work - was ended abruptly. My haphazard team were abandoned by their manager mid-tour. Sorry, but you're just too much like hard work.

Maybe if I could prepare you in my own time instead of against the clock I would carry on. As it is I've turned my attention towards Cycling Manager Pro 2010, which although it comes from the same people I'm hoping redeems all the downfalls of Tour de France Online.

You can support Tim by buying Tour de France Online