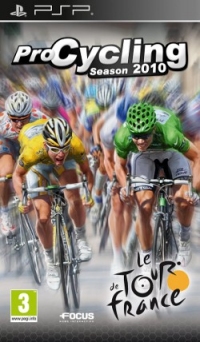 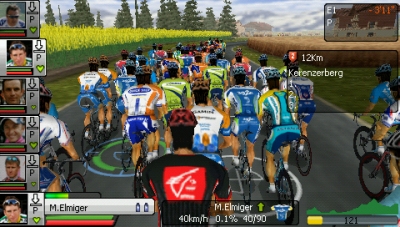 Cycling Pro Manager 2010 PSP throws strategy and biking knowledge into the pot. It did more than enough to tickle my bike gamer itch. But if running a real Tour de France team is anything like this, maybe I should rethink some of my ambitions.

After my slightly disappointing experience with team Squashbuckle in Tour de France Online, playing Cycling Pro on the PSP came close to making it all better.

It's much more hands on than its online partner, and yet keeps the complexity that makes the game such a hit with cycling nuts like me.

When I first started playing Cycling Pro Manager, my attention wasn't fully on the game. The real Tour de France was still on - sadly it's now over for another year - and so I multitask my evenings watching the highlights whilst getting in some time on the game.

Because of this, it took me a while to appreciate how much detail there is in the game. Nearly every cyclist featured has not only the correct credentials, but a picture and accurate stats. If you like to put names to faces, like me, this is an excellent feature.

The courses are also full of attention to detail. All the stages of the 2010 Tour de France are included. No great surprise there, but I hadn't expected to find a whole host of Classic stages from other races and countries.

If you are interested in the Tour de France but haven't really followed any other tours, this is a brilliant introduction to what else there is out there. I particularly enjoyed some of the stages around Belgium and the Netherlands - living in Amsterdam has given me a love of cycling minus the mountains that just won't go away.

Cycling Pro Tour 2010 isn't for the faint of heart.

Cycling Pro Tour 2010 isn't for the faint of heart though, it takes a lot of work to keep your team winning races. A few times it got a bit heavy for me in the main Campaign, so I ducked out for some Single race relief.

Although I was flummoxed by the controls once or twice - Cycling Manager Pro makes full use of any available PSP buttons - once I got the hang of it, I really quite enjoyed managing my little team through their trials and tribulations. And being able to control them in real-time through the race stages really helped to bring the game to life.

The music didn't match the rest of the game though - more often than not, noticeable by its absence. There was backing music in the other parts of the game, so why not in the races? I don't know about you, but I find it creepy when games like this have no music. I ended putting on the proper Tour de France music on whilst playing. Luckily, there was nobody around to laugh at my undoubtedly amusing faces whilst grooving to the music and trying to direct a full cycling team and trying to get some points, medals or jerseys.

I hadn't expected to learn much from the game - I'm something of a biking-girl-geek. But in order to succeed, I really needed to concentrate and learnt a good deal about Tour Cycling.

I hadn't expected to learn much from the game - I'm something of a biking-girl-geek.

Being in control of nine cyclists all with different skills really demands your attention as a manager. This bit I expected. However, what I hadn't counted on was having to learn how to use that knowledge on the fly. As I raced along the roads, I had to remember to keep a close on all my team riders, making sure they all had enough water.

Choosing when each player should relay was quite time consuming, but in most stages it felt like no time at all until the final sprint was upon me. This brought another problem - which rider to concentrate on? Shall I try and give my sprinter a chance? Or should I back one of the other riders, and try to get them a higher time ranking? I can tell you, I wouldn't like to have that job in real life. It was hard enough trying to work it out for the little imaginary people on the PSP. If real emotions and real racing were involved, I'd be a whimpering mess!

You can support Tim by buying Cycling Pro Manager 2010