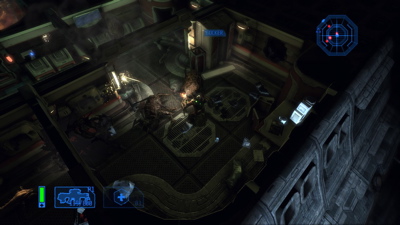 Alien Breed Evolution XBLA updates the Team 17 Amiga classic but stuggles to capture the frantic pace of the original. Placing you on a derelict ship in three moody dimensions gives the experience a graphical face-lift, but the methodical pace of play pales in comparison to the original panicked fire-fights.

I never owned the original Alien Breed, yet while I was only a simple down shooter, I remember envying those Amiga owners who did. Today the sprites don't look like much, crude imitations of H.G. Giger's Alien, but nineteen years ago it transported me to a terrifying world. When I heard it was to be rejuvenated on XBLA, I was elated. It was a chance to live an alternate childhood in which I was one of the lucky Alien Breed owners.

Alien Breed Evolution is, for all intents and purposes, a twin stick shooter, but by virtue of a very measured pace and a dark industrial setting it could easily have adopted a survival horror facade. Long periods spent moving through a massive space vessel trying to rescue key systems and prevent the crippled craft being ripped from its orbit provide a constant sense of impending doom.

When attacks come they are frantic, but they come rarely.

I have no difficulty suspending my disbelief that I am an engineer on a doomed space ship billions of miles from Earth. In this grimy, functional environment, I can believe that even before disaster struck, he would have been constantly repairing faulty systems. It is a universe that feels so hostile I can even concede that this glorified janitor would be skilled in every weapon available.

As I walk the shadowy corridors I am surprised by the game's restraint. When attacks come they are frantic, but they come rarely. Much of the time is spent in their anticipation. On occasions I am apprehensive as I move forward, unsure of what lies ahead. It is a tension I revel in, until I remember the overly efficient radar. My HUD's red and blue sensor pulses in the top right corner of the screen, alerting me to any possible danger long before it falls into view, destroying the creeping sense of terror.

I cannot excuse the fact that a few small design decisions destroy the impressive atmosphere that shrouds the rest of the game.

The radar and the monotony of the numerous maintenance tasks are ultimately the game's downfall. Despite the tense atmosphere and alien attacks, the entire experience feels mundane. Locating a system, finding it's failed, and then going to three disparate locations to get the mainframe back onlineso I can return once more to the first system and finally activate it was dull the first time. By the third and forth repetition these tasks became mind numbing. Confining you to a small ship and making you traipse back and forth through it to perform mundane tasks may help construct a believable environment, but does little to maintain tension.

Perhaps it is the rose-tinted glasses I'm wearing or progress in the genre since Alien Breed's original release, but this is a game that falls short. After all, retreading the same ground to repair a damaged craft did not affect my enjoyment of Dead Space one bit. But as much as I appreciate what Alien Breed is trying to do, I cannot excuse the fact that a few small design decisions destroy the impressive atmosphere that shrouds the rest of the game.

You can support Alex by buying Alien Breed Evolution: Episode 1